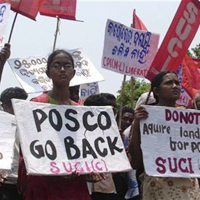 08 November, 2014
Print this article Font size -16+
Posco's planned $12-billion steel project in India moved a step forward on Friday, 10 May, 2013, after a court handed a decision on a mining licence to the government, raising the South Korean firm's chances of getting preferential access to iron ore.

The world's fourth-largest steel producer has waited eight years to get necessary clearances, land and an iron ore mining licence to start work on the project, billed as India's largest foreign direct investment.

While the project planned in eastern Odisha may still face hurdles from protesters and over issues such as land ownership, a supportive federal government is expected to clear the path for Posco's top concern - a captive mine that will give it steelmaking raw material iron ore.

"This is positive for the company because the central government has been supporting this project," said Rakesh Arora, a metals expert and head of research at Macquarie Capital Securities (India). "There's no doubt that without iron ore, this project was not starting at all."

India was concerned about the delays and Prime Minister Manmohan Singh himself is monitoring the project's progress, Trade Minister Anand Sharma had said in January.

Shares of Posco, which counts billionaire investor Warren Buffett as a shareholder, cut their losses after the news to end down 1.24 per cent, in a wider Seoul market that closed 1.8 per cent lower.

"We believe that this will significantly help to expedite the project," Y. W. Yoon, chairman and managing director of POSCO India, said in a statement. "We are happy that it has come at a time when there has been significant progress on the land clearance work for the project."

The company signed an agreement with Odisha in June 2005 to set up the steel plant on 4,004 acres of land. It is seeking 2,700 acres to begin the project's first stage, which involves setting up two 4-million-tonne plants in two phases.

So far the company has been able to get physical possession of just 1,700 acres.

Posco says that if it gets the required land in the current year, the first-phase of the plant may be commissioned sometime in 2018. At full production of 12 million tonnes, Posco's project would have accounted for 16 per cent of India's total current annual steel output of 76.7 million tonnes.

Hurdles Remain
The court order notwithstanding, the project could still face hurdles. A decision is unlikely to be made soon by the government, which is mired in various allegations of corruption in a pre-election year.

And Posco is expected to face further protests from rights activists, environmentalists and former politicians.

"At no cost would Posco be allowed to enter into the hills. We will not allow any mining," said Jual Oram, a former federal tribal affairs minister from the Bharatiya Janata Party, the main opposition party in New Delhi. Oram has been leading the fight against the company's mining plan.

Posco, though, has hedged its bets and raised its investment in other emerging countries such as Indonesia to make up for its slow progress in India.

The project is one of several in Odisha facing protests and delays. Investment plans of ArcelorMittal and Vedanta Resources in the state have been similarly delayed.