Port Blair airport to get new terminal building by 2021

Port Blair airport to get new terminal building by 2021

New Delhi [India], September 16 (ANI): Veer Savarkar International Airport in Port Blair will soon have a new terminal building to handle the surge in passenger traffic.
The Ministry of Civil Aviation said that more than 65 per cent of project work is completed and the new terminal building of Port Blair is scheduled to be ready by the middle of 2021.
"The airport currently handles 18 lakh passengers annually. Considering the surge in the passenger traffic, Airports Authority of India has undertaken the work for construction of New Integrated Terminal Building at a cost of Rs 700 crores," the ministry said in a release.
With a total built-up area of 40,837 sq m, the new terminal building will be capable to handle 1,200 passengers during peak hours and about 50 lakh passengers annually.
The world-class building is totally air-conditioned and will be equipped with modern passenger facilities with 28 check-in counters, three passenger boarding bridges, five conveyor belts with In-line scan system and state-of-the-art Fire fighting and Fire Alarm system, the ministry said.
"The new passenger terminal building will have three-levels comprising of lower ground, upper ground and first floor. The lower ground floor will be used as remote arrival, departure and service area, the upper ground floor will have entry gate for departure passengers and exit gate for arrival passengers and the first floor as awaiting lounge for international passengers," read the release.
The city side area of the Airport will also be developed with adequate parking facilities for car, taxi and buses along with the landscaping. 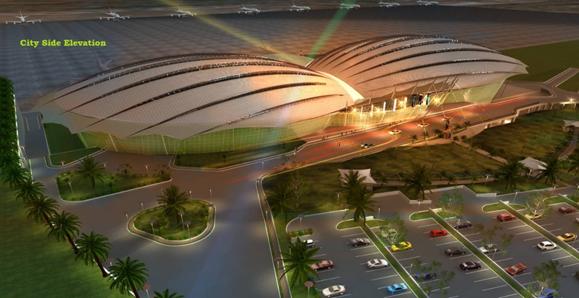 "Inspired from nature, the design of the terminal is a shell shaped structure depicting sea and islands. The New Terminal Building with a span of 240 mtrs having two 120 mtr column less spans supported through periphery steel columns, will facilitate columns less large span arrival and departure hall," the release said.
According to the Civil Aviation Ministry, the new terminal building is a structural steel framed building provided with aluminum sheet roofing and cable net glazing all around.
"The entire terminal will also have 100 per cent natural lighting through skylights provided at roof level. Curved shaped Cable Net Glazing will be provided all around the terminal building. This is first time introduced at such a large magnitude at Port Blair Airport," it said. (ANI)