Popping Up With A Purpose 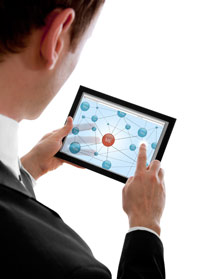 
Games can engage users for longer and are thus a favourite among advertisers, followed by social media apps such as Facebook, Twitter and LinkedIn, entertainment apps such as YouTube, Gaana.com and Saavn Music and news apps such as The Times of India, Economic Times and NDTV. So while for desktop Internet, the primary driver was information, on a mobile unit it is gaming and casual entertainment. And, of course, advertisers are there where the traffic is. "People will more likely click on a newspaper or content app button than type in the web address," says Kiran Gopinath, founder and CEO of Ozone Media, one of the largest digital advertising networks in India.

While mobile gadgets provide wider reach, apps have the potential to carry rich media content to the specifically targeted audience and offer possibilities to measure the impact — something that is critical for the advertiser. "With a remarkable penetration of smartphones, in-app advertising is just about to explode in India," says Rachna Sharma, vice-president and head of digital marketing at advertising agency JWT. "We expect this market to grow at 100 per cent for 2-3 years," says Ozone Media's Gopinath.

A Compelling Market
By one estimate, there are over 80 million users of the Internet on mobile devices. Though this is only a small part of India's 900 million mobile phone subscribers, for advertisers, it is still substantial since one mobile phone represents one user while a desktop may have multiple users. This means an advertiser can better understand the customer.

Even though in-app advertising that lets consumers experience the brand is still 18-24 months away in India, advertising agencies are getting creative with apps. "Mobile services are going to be so imbued with infrastructure that we will expect it to be tightly integrated with everything we do," says Suresh Reddy, chairman and CEO of global advertising network Ybrant Digital, which puts advertisements on platforms such as Facebook and MSN. "The past 10 years were about voice communication. The next 10 years will see a rapid growth in the way applications and services are built," he adds.

break-page-break
In India, Nokia's Symbian and Google's Android platforms dominate. Even though Nokia lags in the smartphone race, its Symbian platform attracts close to 55 per cent of mobile advertising thanks to pre-installed apps on its WAP-enabled phones. Android attracts over 40 per cent of the advertising but is expected to overtake the Nokia platform this year.

The Cash Register
Developers are busy experimenting with various monetisation models, including paid apps (such as OMGPOP, Asphalt 6: Adrenaline, Grand Theft Auto III), freemium apps (where revenue comes from upgrades; for example, Angry Birds, Fruit Ninja and Assassins Creed) and free apps (WhatsApp Messenger, Instagram and Saavn Music). With a paid app, volumes will be lower but the amount earned per download is known. A free app will have higher volumes, and so increased usage. And if this can be translated into more advertisement impressions within the app, a free app may even generate more revenue than a paid app.

Publishers can either monetise their apps by selling inventories to advertisement aggregators or by getting dedicated sponsorship from a particular brand and placing it strategically within the app.

Established players such as UTV-owned Indiagames — known for its cricket gaming apps — are able to get sponsored activities. "For our Ra.One game (based on sci-fi movie Ra.One), we roped in Parle-G. For the current IPL season, some major brands such as Volkswagen are sponsoring our IPL gaming apps," says Vishal Gondal, CEO of Indiagames.

Sponsored advertisements allow interactivity that advertisers hope will lead to engagement and brand building. The advertisement rates depend on the number of downloads, time spent on the game, among other things. So, some people do not want to put advertisements in the middle of a game as it distracts gamers. "We do not put advertisements in the middle of the game. We would rather put it before or at the end . That is how we are getting a high CTR (click-through ratio) of 10 per cent," says Virat Khutal, founder of Twist Mobile, a mobile app start-up that develops gaming and photo-effect apps. It earns $3 for every 1,000 impressions, according to Khutal.

The usual revenue split is that for every Rs 100 earned through in-app advertising, Rs 30 goes to the app store, and of the remaining Rs 70, 60 per cent or Rs 42 goes to the publisher and the rest goes to the advertising network.

Experts, however, believe that the current mechanism for the developer industry is not stable and needs to evolve. Currently, they use cost per thousand clicks (CPC), cost per thousand impressions (CPM), cost per thousand leads (CPL) generated, and cost per thousand acquisitions (CPA) as a measurement tool, similar to online advertising. "While an advertiser would ideally like to pay using the CPA or CPL method, the advertising network would prefer the CPM model. So they generally settle for the mid-way CPC," explains Anuj Kumar, co-founder and CEO of Singapore-based app developer and advertisement-serving firm Affle, which has a long-term contract to manage advertising on ESPN's mobile initiatives. It is currently running a mobile campaign for Samsung's Windows phone Omnia W.

But the format and revenue model depends on the advertiser's objective. An application that is used frequently and for long durations, such as games or social media sites, may use a free model as it can generate a lot of impressions, while apps that are used only a couple of times and then discarded may use the paid model. Similarly, brands like Coca-Cola, Colgate, Hindustan Unilever or Volkswagen may go for the CPM model as their aim is not to generate sales but awareness. Whereas an e-commerce firm may use the CPC or CPL model as it expects the campaign to stimulate visits to its online store.

What Makes It Click
Despite a frenzy to download the latest apps on smart devices, making users pay for apps is not an easy task. This kicks in the model of free apps that leverage their success to attract advertisers and thus create income. The fact that users do not think twice before downloading a free app only helps propagate the app.

This model helped Indore-based Twist Mobile double its revenues to Rs 1 crore in just the second year of its operations. "We managed to start making money from the very launch of our apps in the Nokia Ovi store," says 31-year-old Khutal, an architect by qualification. Manish Malik, founder and CEO of Delhi-based app-developing firm Hazel Media, says: "There are other means of monetisation, too, including paid apps and paid content subscriptions. But in-app advertising definitely fares the best." Had it not been for in-app advertising, Angry Birds-maker Rovio Entertainment would not have been making $1 million every month from in-app advertisements from Android alone.

break-page-break
What gives this nascent advertising platform the much-hyped growth potential is the well-established supply side of the market. "The other aspects are all ready — the consumers, the phones, the Internet connections and the content areas," says Madan Sanglikar, CEO of a recently-launched mobile advertising firm, ad2c.

"Earlier, the market was dominated by publishers who directly dealt with advertisers. But over the past 12-18 months, some of the more recognisable mobile advertising network providers are starting to penetrate this stranglehold on the display marketplace and fill sizeable inventory," says Reddy of Ybrant Digital.

In Fits And Starts
Undoubtedly the medium has potential but the demand is still slow. Advertising agencies are not always able to convince clients to spend on app-based advertising as agencies themselves often do not know how to leverage the medium. This is why a new breed of mobile marketing solutions firms is cropping up to fill the void. These firms specialise in marketing and advertising on the mobile platform and offer end-to-end mobile marketing solutions, knitting together all the participants in the value chain, including advertisement networks, media publishers, advertising agencies and the brands.

Advertising agencies, too, are using dedicated mobile marketing firms. China-based mobile marketing solutions firm MadHouse entered India in partnership with global marketing communications firm WPP. "It will always be an advantage for a brand or an agency to work with a solutions firm that offers end-to-end solutions to its clients, so that it reduces their pain in dealing with 4-5 different vendors to execute just one campaign," says Vinod Thadani, COO of MadHouse India.

Then Japan-based mobile marketing firm D2C and Singapore-headquartered advertisement network Affle launched ad2c with Dentsu creative agency. "We will handle whatever complexity that mobile comes with… or at least abstract the complexities for brands," Anuj Khanna Sohum, co-founder and chairman of Affle.

The mobile medium is still new. "First they (advertising agencies) need to acquire the skills to leverage the medium. The creative side, too, has to know how to create impactful advertisements for the small mobile screen," says Ravinder Pal Singh, vice-president of media at digital media agency Neo@Ogilvy. JWT's Sharma, though convinced that the mobile medium has the advantage of strategic placement, says, "The main question that faces us is ‘who will take the plunge first'. Other questions that surround advertisers are — have there been any successful case studies? Or what is it doing for my brand? Or should we invest in a new medium?"

Apart from it being an untested medium, data charges are also a deterrent for mobile in-app advertising. An app could be anything between 2-200 MB of data, and updates can be as heavy. "Data consumption may be increasing but 3G data pricing, for instance, is still prohibitive," says Rahul Pande, CEO of Converse Today, a Mumbai-based app development firm which develops news content apps for major publishers. (3G tariffs are in the range of Rs 800-1,200 for 5GB data, 4G price is about Rs 1,000 for 6GB.) Its mobile marketing arm bonsai.mobi serves advertisements from brands such as Volkswagen, HSBC, Burberry and Ford on the news apps.

Increased familiarity with the mobile medium could turn the tide in favour of in-app advertisements. But the biggest hope rests on the anticipated data explosion when 3G and 4G services proliferate, and the increased competition brings down data usage tariffs.

With inputs from Dibyajyoti Chatterjee