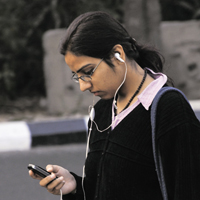 Mobile Number Portability (MNP) — an option that gives mobile subscribers the freedom to change their operators without changing the mobile number — will miss the 1 January deadline announced by Telecom Minister A. Raja.

The deferring of MNP for the second time after it was officially announced would highlight how a collegium of operators, government and the regulator, the Telecom Regulatory Authority of India (Trai), is holding India’s 500-million subscribers hostage to their whims and depriving them of an essential consumer service using lame excuses.
This time round, while the government has suddenly woken up to a security concern (surprising, since the MNP is being discussed for many years), operators say the government is not giving them the right coordinates for technical coordination. The Telecom Engineering Centre (TEC), the nodal department in the communications ministry to approve technical issues, is yet to commence a pilot project or present a case study in India for MNP, and the regulator Trai pleads lack of powers to get the MNP implemented.
“The government is hand-in-glove with the operators to ensure that MNP does not get implemented,” says S.L. Aggarwal, telecom advisor of VOICE, a Delhi-based consumer advocacy group. Having discussed MNP imple- mentation for over three years, Trai finally announced the introduction of MNP as far back as on 8 March 2006, and the government promised on 10 December 2007 that operators would offer it by mid-2009. In fact, the deadline was deferred first to September 2009 and then to 31 December 2009.
Ironically, government-owned operators such as Bharat Sanchar Nigam (BSNL) and Mahanagar Telephone Nigam (MTNL) were the first to express their inability to launch MNP. Private operators, who have been dragging their feet, followed suit. Tata Teleservices, Reliance Communications and Bharti Airtel maintain that while their respective networks are ‘MNP-ready’, they cannot launch unless BSNL and MTNL launch it. In contrast, Gurudas Kamat, minister of state for communications, said in Rajya Sabha last week that MNP was delayed because operators had not completed upgradation of their networks.
“It is a pity that some operators have not bothered to adhere to timelines,” says Marten Pieters, CEO of Vodafone Essar. He says it would create an unequal playing field if operators who are ready were made to wait because others, who are not so confident about their network or service quality, are permitted to stall the implementation.
“MNP should rather be leveraged by operators to ‘buy’ long-term loyalty,” says Vinayak Arora, chairman of FirstSolv Worldwide, a Delhi-based telecom analysts firm.
Meanwhile, in the third week of December, the home ministry is believed to have raised a security alert over one of the foreign partners implementing MNP — Telecordia Technologies of the US — nine months after the letter of intent was given to Telecordia in March 2009 to implement MNP.
A spokesperson for Telecom Solutions India says in an email response that there has been no communication from the home ministry. “Telcordia is in full compliance of DoT’s conditions stipulated in the MNP licence”.
According to a survey by The Nielsen Company to gauge consumer attitudes and behaviour towards mobile operators in India, 18 per cent of India’s 500-million mobile subscribers would change their operator if MNP was introduced in the market.
(This story was published in Businessworld Issue Dated 04-01-2010)
Tags assigned to this article:
magazine m rajendran trai a raja bsnl mobile number portability