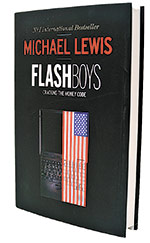 The Dow Jones Industrial Average plunged 600 points and recovered in a few minutes; it was called the ‘flash crash’. Incidentally, back home in October 2010, a fat figure error caused by a dealer at a local brokerage had also led to a ‘flash crash’!

Though the ‘flash crash’ in both the instances was legally challenged (the incident in India is being fought in court between the NSE and affected broker/s even as I write this review), there were massive disruptions in markets on both occasions and investors lost lots of money.

Over the past two and a half decades, we have witnessed a massive transformation of the trading floor — from an open outcry system to electronic trading to Direct Market Access and algorithm-based trading. Thanks to the efficiency and power of sophisticated computers as well as the availability of bigger and larger fibre bandwidth, access to markets has been never so easy and fast. The ability to execute orders faster has allowed market participants to trade and churn their portfolios several times during a trading session. The Warren Buffett style of investing is passe when you consider the emergence of high-frequency trading (HFT), which Michael Lewis has talked about in his book, Flash Boys.
Lewis narrates the story of a young equity trader, whose curiosity led him to question electronic trading after he found that every time he placed an order on screen, it vanished and the price changed to a higher amount. The book interestingly captures the trader’s anxiety, which leads him to think beyond the screen. The young RBC trader sets out to  start a new exchange. This exchange eventually becomes an answer to the so-called dark pool of orders of HF traders pumped in through a fast and dedicated fibre optic network and trading engines and ripping off investors of billions of dollars! The book exposes the greed of big banks, which are eager to make fast money by subscribing to dedicated fibre networks and creating a faster reach to the market. All this reflects the disproportionate advantage the HF traders had over investors in the electronic market.

The book also tells you how HF traders manipulate the market by placing ‘teasing orders’ and cancelling them before they materialise from the ‘dark pool of orders’, driving up the price in the process and reselling the orders to real buyers. All these are perfectly and swiftly timed and have the imprint of insider trading and front running of trades!

The hero of Flash Boys finds financial success with his new exchange called IEX. It is an answer to the mysterious disappearance of  ‘sell’ offers from electronic trading screens. The book is an interesting read. A reader who understands the markets well will, at some point, get the feeling that Lewis cleverly underplays HF traders who are ripping off investors and destabilising global financial systems!

The important debate the world over is whether HF trading is a liquidity enabler or a price destructor! The world is also divided over the question: Which produces better returns on investments — HF traders or investments? The emergence of exchange-traded funds (ETFs) along with the adoption of algorithm-based HF trading to produce outperforming returns, including the one practiced by long-only investors like insurance and pension funds, has indeed confused investors over selection of products, whether for trading or for investment purposes.