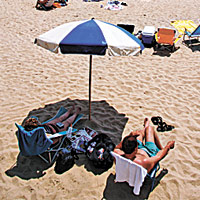 08 November, 2014
Print this article Font size -16+
Just as everyone is heading out for summer vacations, Google+ has launched a neat little tool to transform your holiday pictures into a great digital travelogue.

As much fun as holidays are, upon return, holiday-goers are faced with the task of sifting through hundreds of snaps and uploading them for friends and family to see. Now, at the click of a button, all pictures can be integrated together into a beautiful presentation.

The tool, called Stories and Movies, automatically weaves your photos and videos into amusing travelogues. It is available on the web, as well as through an Android app. An iOS app is to follow soon. All you have to do is click on the auto back-up feature on your smartphone’s G+ app, and all photos and videos will automatically migrate to it. However, if you are shooting with a camera, you will have to upload the pictures to Google+.  This automated tool chooses the best shots, avoids blurry ones and curates them all into a great-looking scrapbook. What’s more, it adds relevant information such as names of places visited, restaurants, and so on (provided you have your location setting on).

“No more sifting through photos for your best shots, racking your brains for the sights you saw, or letting your videos collect virtual dust. We’ll just gift you a story after you get home,” wrote Anil Sabharwal, director of Product Management for Google+, in a blog post.

Blink is a product of Meh Labs, a startup set up by ex-Googler Kevin Stephens.

Linked on Mobile
LinkedIn gets a daily average of 15 million profile views, 1.45 million job views and 44,000 job applications via mobile

Scoring Tweets
In a span of a few days and 30 matches in the seventh season of  Indian Premier League, a Twenty20 cricket tournament, its Twitter handle @IPL has already posted three million Tweets related to the season

Shashi Tharoor
@ShashiTharoor
MP, Thiruvananthapuram
“Would BJP followers on Twitter ease up a little on their daily vitriol? You’ve won, guys. Chill a bit. The level of bitter abuse disgraces u”

Ronnie Screwvala
@RonnieScrewvala
Founder and Advisor, Unilazer
“We have 61 women members in the Lok Sabha, highest in the history of our country — progress in all directions @narendramodi”