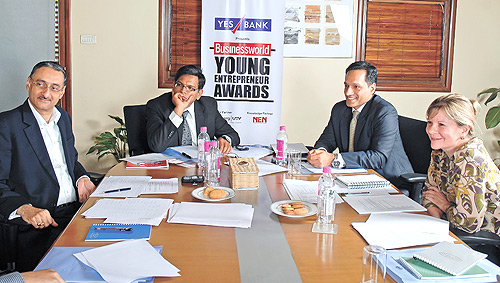 The four jury members were experts in private equity, investment banking and entrepreneurship. Laura Parkin, co-founder and CEO of National Entrepreneurship Network (NEN), returned to the jury for the second successive year. NEN, promoted by the Wadhwani Foundation, partners 470 top-tier academic institutes in India to foster entrepreneurship ecosystems for students. Investment banking was represented by Ranu Vohra, co-founder, MD and CEO of Avendus Advisors, a 15-year veteran of the sector well regarded for his ability to spot deals early in emerging sectors.

Private equity veteran Nitin Deshmukh, CEO of Kotak Private Equity, also joined the jury this year. Deshmukh has been investing in India's private equity for over two decades, beginning with ICICI Venture. Some of his earliest bets on entrepreneurs — Pantaloon Retail, Biocon, TV18 and Naukri — are established industry leaders today. Sanjay Agarwal, president and business head of business banking at Yes Bank, completed the jury. Agarwal has 18 years of experience in commercial banking and earlier worked at Standard Chartered Bank.

The basic parameters for evaluation remain the same each year, but every jury brings different sensibilities to the process. The jury for category A discussed the best parameters for more than 30 minutes. "The companies need to have a rationale in terms of how they will achieve their growth projections," said Deshmukh. "At the same time, they must have the aspiration for that big growth number," added Vohra.

The jury finally focused on three parameters — strength of the idea, execution capabilities, and potential for scale. It was decided that each company would be first scored by each jury member on each parameter. The average of the scores assigned to each company was then used to create a smaller shortlist for the winning five. The final deliberations focused on eight out of the 15 companies shortlisted in this category.

break-page-breakThe five winners elicited detailed debates before a consensus was reached. All the members liked the innovation aspect in Gridbots Technologies, which was placed No. 2. But there were doubts on its ability to find capital to grow at the right time. The company makes industrial and consumer robots, and is now looking for funds to move into mass production (see page 38). "Otherwise, this company has all the positives. Robotics is a big market," said Vohra.

SEED, the financial inclusion services company that was placed No. 1, raised some concerns in the context of recent problems in the microfinance sector. "The company may also have to think about the sustainability of the business if banks ever decided to get into the financial inclusion services area," said Deshmukh. The most interesting discussion, however, was about digital media company TouchMagix, led by Anup Tapadia. The jury members felt that because it is currently a very niche business, it could hit a growth roadblock. "But this kid (Tapadia) learns unbelievably quickly. He is definitely somebody to watch," said Parkin, who has interacted with Tapadia in the past through NEN.

The company that won the hearts of the jury for its ‘cool idea quotient' was Mumbai-based corporate library service company Kwench. "I've used its services and it is good," said Yes Bank's Agarwal. The company enters into annual or three-year contracts with corporate establishments and brings books across 40 titles to the corporate executive's desktop. Finally, Wirkle Technologies, which makes mobile applications for businesses, drew mixed reviews. This was chiefly on account of the jury not being clear on how much of the company's business was in products. Also, the three-year revenue target provided by the company was seen as rather modest. "Their aspirations don't seem to be very high," said one of the jury members. Still Wirkle made it to the list because the jury thought that the idea was very interesting.