Washington [US], February 5 (ANI): American singer Phoebe Bridgers has come forward with another horror story about musician Marilyn Manson, who has been accused of sexual abuse by multiple women, including American actor Evan Rachel Wood.
Bridgers took to Twitter to detail her experience with Manson, opening up about a specific incident that took place when she went to his house as a teenager. The 26-year-old singer in her tweet revealed that Manson referred to a room in his home as the "rape room."
"I went to Marilyn Manson's house when I was a teenager with some friends. I was a big fan. He referred to a room in his house as the "r*pe room", I thought it was just his horrible frat boy sense of humor. I stopped being a fan. I stand with everyone who came forward," she wrote.
The singer added, "The label knew, management knew, the band knew. Distancing themselves now, pretending to be shocked and horrified is f-----g pathetic." 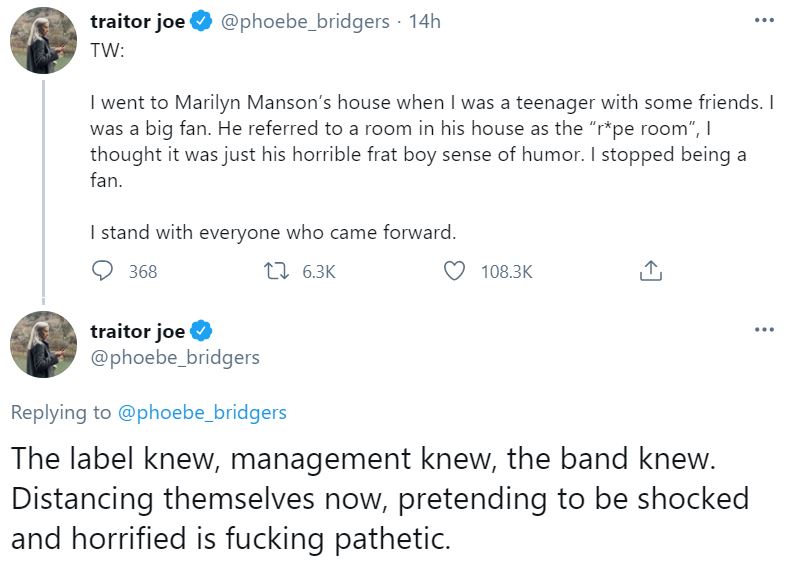 However, Manson has not responded to the fellow artist's comments, which she made on Twitter on Thursday, days after his ex-fiance and actor Evan Rachel Wood publicly accused him of abusing her. Manson denied her allegations, claiming that his intimate relationships have always been consensual.
Wood has often alluded to Manson when speaking about being a survivor of domestic violence over the years. Wood and Manson went public with their relationship in 2007 when she was 19 and he was 38. They became engaged in 2010 but broke up later that year.
In an Instagram post on early Monday morning, Wood said, "The name of my abuser is Brian Warner, also known to the world as Marilyn Manson. He started grooming me when I was a teenager and horrifically abused me for years. I was brainwashed and manipulated into submission. I am done living in fear of retaliation, slander, or blackmail. I am here to expose this dangerous man and call out the many industries that have enabled him, before he ruins any more lives. I stand with the many victims who will no longer be silent."
Four other women have also come forward with similar accounts of abuse from Manson. Wood also shared similar stories from photographer Ashley Walters, model Sarah McNeilly, an artist who identified herself only as Gabriella, and student Ashley Morgan.
Manson responded to Wood's allegations in an Instagram post on Monday night.
"Obviously, my art and my life have long been magnets for controversy, but these recent claims about me are horrible distortions of reality," he wrote.
"My intimate relationships have always been entirely consensual with like-minded partners. Regardless of how -- and why -- others are now choosing to misrepresent the past, that is the truth," he added.
Wood spoke out about being a survivor of rape and domestic violence in a Rolling Stone article in 2016 and has focused her activism on those issues.
In wake of the allegations against Manson, his upcoming appearances on Shudder's Creepshow and Starz' American Gods were scrapped. The singer's record label, Loma Vista Recordings, also dropped him. (ANI)