Petrol, Diesel Prices May Be Hiked This Week 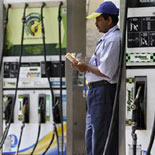 08 November, 2014
Print this article Font size -16+
Petrol price may be hiked by about Re 1 a litre and diesel by 50 paise a litre by this weekend as oil firms begin to exercise the recently accorded freedom to adjust rates in step with cost.

State-owned oil firms are losing Rs 1.32 a litre on petrol as international oil rates have firmed up during the last two weeks. They intend to pass on most of the loss to consumer at the next review due on February 15.

Also, diesel prices may be increased by 40-50 paise a litre in line with the freedom given by the government last month to raise rates of India's most consumed fuel in small dozes every month till such time that the Rs 9.22 a litre loss is completely wiped out.

"Gasoline (petrol) prices in international market are rising. The trend shows that we will have under-recoveries (losses) on petrol," said R S Butola, Chairman of Indian Oil Corp, the nation's largest fuel retailer.

"We will review the prices at the fortnightly review (due on February 15)," he said. "We won't say there is no possibility (of a price increase) but I cannot say what we will decide in that review." .

Sources said FOB price of gasoline have risen from USD 123 per barrel, against which the retail petrol rates are benchmarked, to USD 131.

Petrol price was last revised on January 18 when the price was cut by 30 paise to Rs 67.26 a litre in Delhi.

The reduction in rates coincided with government decision to give oil firms freedom to raise diesel prices in small monthly dozes to eliminate all of the losses on the fuel. Oil firms hiked diesel price on that day by 50 paise to Rs 47.65 a litre in Delhi.

"We will review the prices when they are next due. I cannot say if we will change them or not," Butola said.

Sources said the oil firms may decide not to pass on the entire loss on petrol in one go and the likely increase could range anywhere between 50 paise to Re 1. Diesel rates in all probability are likely to be hiked by 40 to 50 paise a litre.