People To Bank On 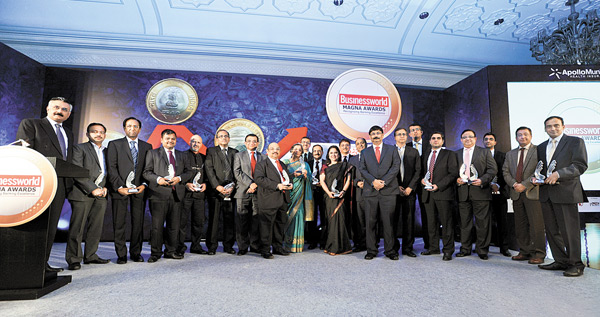 08 November, 2014
Print this article Font size -16+
The best and brightest from across the Indian banking firmament under one roof in New Delhi. Hard to imagine? This was no figment of the imagination as the Businessworld Magna Awards 2012 — India’s first awards to recognise excellence in both commercial and investment banking — saw the who’s who from commercial and investment banks rubbing shoulders at the Taj Palace Hotel.

While Businessworld’s commercial banking awards, with PricewaterhouseCoopers (PwC) providing knowledge support, have been around for five years, the investment banking awards are a new introduction this year. The former are a tribute to the best banks overall as well as the fastest growing among small, medium and large banks. The awards also recognise the most tech-savvy bank, socially responsive bank and lifetime achievement in the world of banking.

At the outset, managing director and CEO of the ABP (Ananda Bazar Patrika) Group — which publishes Businessworld — D.D. Purkayastha saluted all the winning banks for defying adverse economic conditions.

Deepak Kapoor, chairman of PwC India, underscored the challenges of the business environment in which banks operated. “It’s very heartening to see that despite the challenging business environment, the level of performance was top notch... What gave the winning banks the edge was their efficiency in using capital and managing risk.”

Antony Jacob, CEO of Apollo Munich Health Insurance Company, broadened the discussion. “I believe there is a significant collaborative opportunity between the banking and insurance sectors.”

The guest of honour for the evening, Rajkumar Dhoot, Member of Parliament and president of Assocham, congratulated the winners and hoped that the event “will generate more competition among banks to excel”.

The chief guest, Union minister of rural development Jairam Ramesh, opened his keynote address on a lighter vein. “Apologies for being late. We had a rather unusual event today: Parliament actually functioned! We had a whip, a vote and Parliament really functioned the way it normally should function.”

But he soon took on a more serious note. “The world I come from, many of the assumptions that govern the banking industry get overturned... the assumption that bigger the bank, better the bank; the larger the canvas, the better off we are. In rural development, large banks do not really fulfil the mandate given to them in terms of social objectives.” He went on to urge banks to do more. “Banks fulfil more than a commercial role...banks and financial institutions are crucial to the welfare delivery system (cash transfers).”

The awards for the best banks overall and the fastest growing were then given to the winners amid thunderous applause. Ranjana Kumar, former chairperson and MD of Indian Bank, was given the Lifetime Achievement Award while the Banker of the Year Award went to Shikha Sharma of Axis Bank.

Next up on the programme was the unveiling of the special issue of Businessworld devoted to the best dealmakers of 2012. The honours were done by Jairam Ramesh, Rajkumar Dhoot, Antony Jacob, Aveek Sarkar, editor-in-chief of the ABP Group, and Prosenjit Datta, editor of Businessworld.

The unveiling of the special issue was followed by the awards for investment banking. The first set of awards was given to arrangers of individual deals done since 1 January 2012. The second recognised financial houses based on the total volume of deals done by them. In both sets, the top 3 deals were referred to a jury which decided the winner. The data for the awards was provided by Bloomberg.