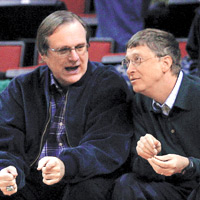 James Murdoch Moves Up The News Corp Ladder
James Murdoch moved one step closer to succeeding Rupert Murdoch as the chief of News Corp this week. He was made the company's deputy chief operating officer.

Xirallic Shortage Paints A Sorry Picture
Major automakers in the US and Europe — including Chrysler, Toyota Motor, General Motors and Ford Motor — are unable to produce cars in certain colours after the earthquake in Japan. The shortage of a pigment called Xirallic has forced automakers to stop taking orders for vehicles in certain shades of black, red and other colours. Xirallic is produced by German chemical company Merck at its Onahama plant near the Fukushima-Daiichi nuclear power station in Japan. The plant was closed after the quake and ensuing tsunami on 11 March. Merck is the only producer of Xirallic in the world.

Android Will Overtake Symbian in 2011, Says IDC
The worldwide smartphone market will grow nearly 50 per cent — from 303.4 million to 450 million — in 2011 compared to 2010, according to research firm International Data Corp. (IDC). Google's operating system (OS) Android will become the leading operating system overtaking Nokia's Symbian, IDC said. Android will have a 39.5 per cent share of the smartphone OS market in 2011, followed by Symbian with 20.9 per cent, Apple's iOS with 15.7 per cent, Research In Motion's BlackBerry OS with 14.9 per cent and Windows Phone 7 and Windows Mobile with 5.5 per cent.

S&P Downgrades Greece And Portugal
S&P's downgraded Greece and Portugal this week saying that they might repay their debt to a new European bailout fund before other investors. This sent the cost of borrowing for these two countries shooting up. The bonds of both countries were hit, with Portuguese 10- and two-year yields jumping to lifetime highs and Greek two-year yields rising 10 basis points to 15.46 per cent. The downgrade left Portugal one notch above junk. Meanwhile, Brazilian President Dilma Rousseff said this week that her government could give Portugal a cash injection by buying back some of the Brazilian government debt it currently owns.