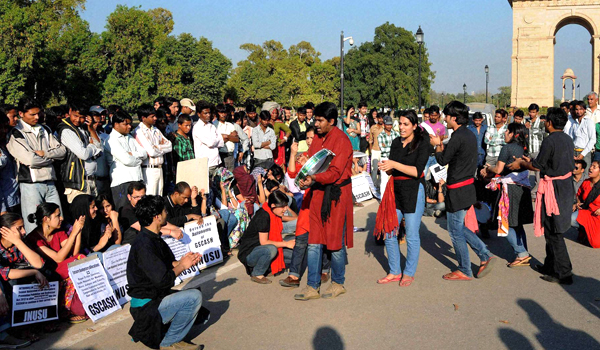 08 November, 2014
Print this article Font size -16+
Parliament on Thursday, 21 March, 2013 passed the anti-rape bill providing natural life term or even death for repeat offenders of rape, with Home Minister Sushilkumar Shinde stating the "law will impact the society for years to come".

Terming it as a "unique law", he said the government is open to further improvement if there is such a need.

The Criminal Law (Amendment) Bill, 2013 commonly known as the anti-rape bill was passed by Rajya Sabha after amendments moved by Left MPs were defeated. The Lok Sabha had passed the legislation on March 19.

Replying to queries, Shinde said the purpose of the bill is to provide stringent punishment also for offences like stalking, voyeurism, acid attacks and human trafficking.

"The bill is significant as it aims to protect mothers and sisters of this country. Over years, such stringent law has not been made," he noted.

The Bill seeks to replace an Ordinance promulgated on February 3, which will expire on April 4. It seeks to amend the Indian Penal Code, the Code of Criminal Procedure, the Indian Evidence Act and the Protection of Children from Sexual Offences Act.

Gang rape has been recognised as an offence, while sexual harassment has been redefined to include unwelcome advances with sexual overtures and showing pornography without consent.

The law also punishes police and hospital authorities with imprisonment of up to two years if they fail to register a complaint or treat a victim.

On human trafficking of minor girls, the Minister said the government has taken cognisance of this offence and certain sections have been incorporated to give stringent punishment. "Police officers and executive officers involved in such offence will also be punished under the law," he said.

Earlier, while moving the bill, Shinde said the "conscience of whole nation was shaken" in the aftermath of December 16 gangrape and a clarion call was given for complete overhaul of laws on rape.

He said new offences have been included in IPC and provisions are also being made for acid attacks. Harsher punishments are being prescribed for crime against women, he said.

Shinde said, "The eyes of the nation are on us and let us honour (through legislative framework) the braveheart who sacrificed herself fighting for honour and dignity."

As per the bill, an offender can be sentenced to rigourous imprisonment for a term, which shall not be less than 20 years, but may extend to life, meaning imprisonment for remainder of that person's natural life and with a fine.

It has provisions for handing out death sentence to offenders who may have been convicted earlier for such crimes.

The Bill, for the first time, defines stalking and voyeurism as non-bailable offences if repeated for a second time. Perpetrators of acid attack will attract a 10-year jail term.