Pakistan Team Depart For Their Tour Of England

The PCB had initially planned to send a squad of 29 players to England, but ten players tested positive for coronavirus earlier this week. 20 players and 11 support personnel of the Pakistan men's senior team on Sunday departed for Manchester as the side gears up to face England.

Both England and Pakistan are slated to play three Tests and three T20Is in a bio-secure bubble and the dates for the tour will be announced in due course.

Taking to Twitter, Babar Azam, the skipper of Pakistan's white-ball team said: "On our way to another historic Pakistan tour to England. Its always great to play in England and I look forward to getting on this journey with our talented bunch of players. Fans, as always we would be in need of your prayers, love, and unconditional support. #PAKvENG #RiseAndRise." 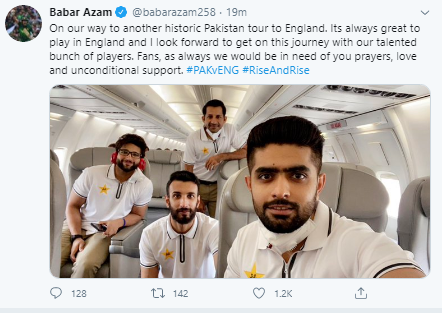 The PCB had initially planned to send a squad of 29 players to England, but ten players tested positive for coronavirus earlier this week.

On Saturday, Wasim Khan, the PCB chief executive, announced that six of those ten players returned negative results when they were tested for the second time.

So, as a result, 20 players and 11 members of the support staff will be travelling to England first. The rest of the players will join the squad later after returning two negative tests.

Pakistan had last played Test cricket in February this year against Bangladesh.
They were scheduled to play the second Test later in April, but the match was postponed due to the coronavirus pandemic.