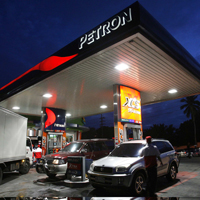 With losses widening to Rs 3.56 per litre, public sector oil firms on 9 August sought an immediate hike in petrol price but were unsure if the government will allow them to do so.

State-owned oil firms had last hiked petrol price by Rs 0.70 per litre with effect from July 24 and since then global oil rates have soared more than $12 per barrel.

"We are losing Rs 1.37 per litre on petrol based on the average price of benchmark gasoline rates in the Singapore market in the previous fortnight. But current calculations based on oil price this month will be about Rs 3.56 a litre," said R S Butola, Chairman, Indian Oil Corp, the nation's largest fuel retailer.

Petrol was deregulated or freed from government control in June 2010 but rarely have prices moved in tandem with the cost.

The oil firms had pressed for raising rates by Rs 1.37 a litre earlier this month but the government discouraged them from doing so in view of the monsoon session of Parliament.

It appears hugely unlikely that prices would be hike during the sitting of the Parliament, which began on August 8 and will continue till September 7.

"We have deliberated this matter and also appraised our Board... We are taking up the matter with the government," he said.

"Yes, there is a case for increasing petrol prices and we are pressing for it... (but) when inflation is high, there are bound to be difficulties (in increasing prices)," he said.

The oil firms, he said, want decontrol to be taken back and the petrol be brought under administrative control so that losses on selling the fuel below cost can be compensated from the Budget like it is done in case of diesel, domestic LPG and kerosene.