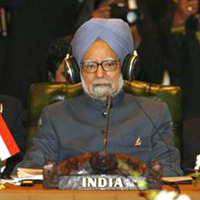 08 November, 2014
Print this article Font size -16+
The Prime Minister's Office on Friday (18 April) came out with data to highlight the progress made under Prime Minister Manmohan Singh over the last 10 years in an effort to counter the damaging claims made by his former Media Adviser Sanjaya Baru.

"The way India has progressed in the last 10 years it has never happened in any other democracy," PMO Communication Adviser Pankaj Pachauri told reporters here.

He said this government has fought against poverty like no other government has done and the progress the road and job sectors has achieved has not been made in any other country.

On GDP growth, Pachauri said, "GDP has grown three times in the last 10 years. Minimum wages have also gone up three times. This shows the government is working continuously."

Asked whether the Prime Minister will speak on the damaging claims made by Baru in his book, Pachauri said the PMO has already made a staement on the issue. Besides, the Prime Minister's family and Congress have also spoken, he said.

"The PMO has given statements about it not once but twice. The PM's family has made its viewpoints public. The party PM belongs to and is heading the government on whose behalf made very long and considered statements about it. I do not think there is anything new to say about it," he said.

Baru's book "The Accidental Prime Minister: The Making and Unmaking of Manmohan Singh", released recently, has claimed that the PM had been "defanged" by the Congress party in his second term with Sonia Gandhi deciding on key appointments to the Cabinet and to the PMO as he seemed to "surrender" to her and to the UPA constituents.