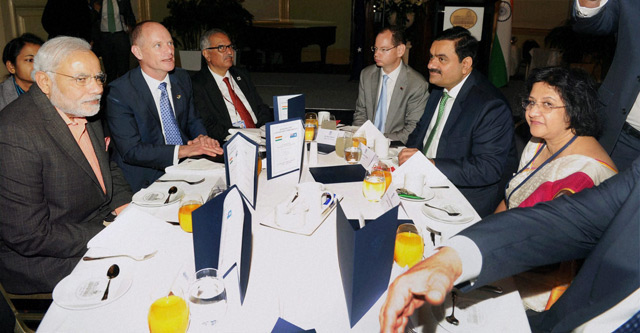 02 December, 2014
Print this article Font size -16+
While Prime Minister Narendra Modi was busy wooing Australian investors to India on Monday (17 November), the G20 has already cited India among countries for launch of major investment initiatives and for having a sustainable growth.

A Brisbane Action plan released as part of the G20 communique also said that the state of the global economy calls for a comprehensive and coherent policy response that restores near-term demand, removes medium-term supply constraints and builds consumer and business confidence.

"While growth in some key emerging market economies is robust and is becoming more sustainable, including in China and India, it is slowing in some other countries," it said, adding that many low-income countries are performing well."

Railways Minister Suresh Prabhu, who was Prime Minister Narendra Modi's Sherpa at the summit of the group of 20 industrialised and emerging market economies, told reporters that India's expected growth is projected to be over six per cent in 2014-15.

Transparent Policies
Speaking at a breakfast meeting hosted by Queensland Prime Minister Campbell Newman on Monday where several Australian business leaders were present, Modi said the environment that is prevailing in the country is "welcoming" and easy to do business, besides having transparent and predictable policies.

"You will begin to find a difference in India," Modi said, asserting that his government is focused on eliminating unnecessary laws and regulations, and making processes easier.

Modi also said that Queensland can be an important partner in India's development in energy, mineral resources, agriculture and food security, education and advanced technology in some areas.

"We have made our policies transparent and predictable.

We have made our procedures clearly defined and smooth," Modi said during a breakfast meeting with Australian business leaders this morning before leaving for Sydney.

He said good governance is the starting point of change and it is important to business as it is to ordinary citizens.

"You will not only be able to convert opportunities into partnerships, you will do it in an environment that is welcoming and easy to do business in," he said.

Modi also said that his government has launched 'Make in India' as a new mission to promote manufacturing in India.

He also told them about his plans to build 100 Smart cities, 50 metro projects and about the modern waste management system for another 500 cities in India.

He mentioned about the projects like The affordable healthcare within everyone's reach, sanitation for all by 2019, a roof over every head by 2022 and electricity in every household.

Modi also praised Queensland for sending a number of trade missions to India.

"Just this September, there was a Queensland-Gujarat Energy Roundtable in Gandhinagar, the capital of Gujarat. And, I am naturally pleased that Queensland will be participating in Vibrant Gujarat in January 2015 to showcase your infrastructure capabilities", he said.

"I know that you are not partial to Gujarat, but you are sending delegations to Kolkata, Delhi and elsewhere," he said.

"Clean Energy with special focus on solar energy for energy efficiency, he added.

He also lauded the Australian province for allowing a 16 billion dollar investment in coal mining in the state.

Modi also stressed on the need for an integrated partnership joint research to improve yield and farm productivity to development of agriculture supply chain infrastructure and food processing.

The Prime Minister also emphasised on the need to develop strong synergies in the area of information and communication technology and its every growing application in all areas of life and business between Queensland and India.

He praised Queensland on its success in the tourism sector.

"Indian investors would be willing to partner with you, as more and more Indians are drawn to the incredible beauty and hospitality of your state", he said.

He invited Queensland to participate in India's ambitious plans for smart, sustainable, habitable cities to cater to its growing urban population.

While concluding his speech, Modi said India-Australia relationship is comprehensive, involving economic cooperation, a growing security and strategic partnership and increasing cooperation in international forums, which are vital for peace, stability and prosperity in our region.

The action plan said that the implementation of policies to comprehensively address both near-term and medium-term challenges could further strengthen the recovery by building confidence and increasing demand.

Noting that the state of the global economy calls for a comprehensive and coherent policy response that restores near-term demand, removes medium-term supply constraints and builds consumer and business confidence, the plan said that the grouping has developed comprehensive growth strategies that addresses these challenges.