New Delhi [India], Aug 15 (ANI): In his address on the occasion of 74th Independence Day, Prime Minister Narendra Modi highlighted among other things his government's efforts for women empowerment and also broke various taboos against menstruation by speaking about sanitary pads.
"We have worked for women empowerment. Navy and Air Force are taking women in combat. Women are now leaders, and we abolished triple talaq, got sanitary pads to women for just 1 rupee," said PM Modi in his speech.
Prime Minister Modi is being praised by netizens on social media for breaking the taboo.
"Mention of sanitary pad for Rs1 in Independence day speech by PM Narendra Modi drew the attention of the nation and gained praise on social media. No other leader talked about it on such a big platform. #AatmaNirbharBharat," a netizen wrote on twitter. 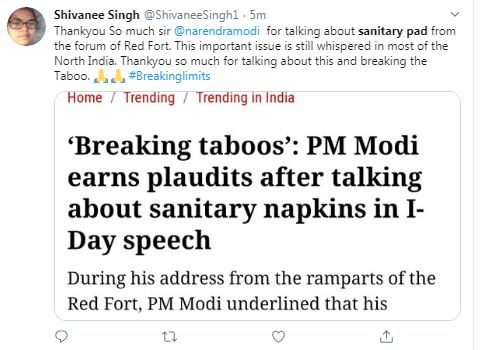 "PMO India not only broke a taboo by mentioning sanitary pads in his Independence day speech but the government's efforts to make them available to women at just Rs 1 through Janaushadhi centres is commendable," wrote another netizen.
Further stressing on women empowerment, PM Modi said, "My dear countrymen, our experience says that whenever there is an opportunity for women power in India, they have brought laurels to the country, strengthened the country. Today, women are not only working in underground coal mines but also flying fighter planes, touching new heights in the sky."
The Prime Minister said that of the 40 crore Jan Dhan accounts opened in the country, about 22 crore accounts are of women.
"At the time of corona in April, May and June, about Rs 30,000 crore has been directly transferred to the accounts of women in these three months," he added.
"This year is the year of a new development journey of Jammu and Kashmir. This year is the year of rights for women and Dalits in Jammu and Kashmir! It is also a year of the dignified life of refugees in Jammu and Kashmir. It is a matter of pride for all of us that the representatives of the local bodies in Jammu and Kashmir are pushing forward a new era of development with activism and sensitivity," said PM Modi.
Announcing the National Digital Health Mission PM Modi on Saturday said that a unique health ID will be provided to every citizen which will have their details of diseases, diagnosis, report, medication and so on.
Speaking from the ramparts of the Red Fort, the Prime Minister addressed the nation and highlighted the 'Atmanirbhar Bharat' spirit of the country that has resulted in achieving self-reliance amid the COVID-19 pandemic.
In his Independence Day address to the nation, Modi mentioned India's strategy for the development of COVID-19 vaccine. The Prime Minister stated that scientists are working on this mission with determination.
On the 74th Independence Day, the Prime Minister said it is an occasion to remember freedom fighters who had laid down their lives for the freedom of the country. (ANI)