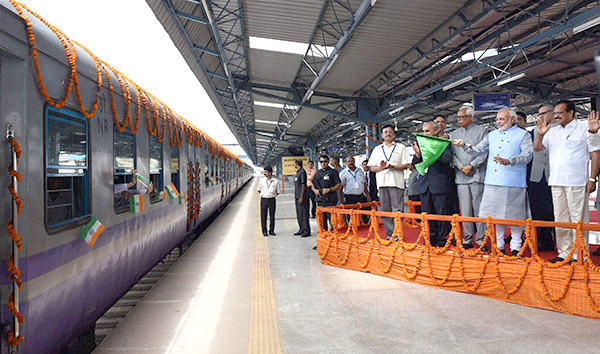 08 November, 2014
Print this article Font size -16+
Ahead of the rail budget, Prime Minister Narendra Modi on Friday (4 July) hinted at an increased role of the private sector in development of railways.

"We want the railway stations to have better facilities than airports. This is our dream and it is not a difficult thing to do and this is economically viable too. I have discussed it in detail with my Railway friends. You will see a change in near future.

"In that, private parties would also be ready to invest because this is a good project economically and will benefit everyone. This would be a win-win situation project and we want to move ahead in this direction in the coming days," he said.

The Prime Minister was addressing a gathering at the inauguration of the Katra rail line project in Jammu.

He said the Railway Ministry has been given a detailed outline of the project.

Railways Minister Sadananda Gowda will present his maiden Rail Budget on July 8 in Parliament. The Government has already hiked the fares for passenger travel and freight transportation.