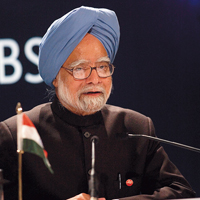 08 November, 2014
Print this article Font size -16+
Who is running India? CBI raided the home of DMK leader M K Stalin on 21 March — two days after the ally pulled out of UPA — triggering a political controversy with an upset Prime Minister Manmohan Singh saying its timing was "most unfortunate" and that the Centre had no role.

An angry DMK said the CBI raid at the Chennai home of party supremo M Karunanidhi's son was an act of "political vendetta" while the Centre disapproved of the searches and said it was not aware of the events.

Under fire for conducting the searches, CBI sought to defend its action, saying it was "strictly" in accordance with procedures and there was no intention whatsoever to target any particular individual.

"We are all upset at these events. The government had no role in this that I am sure of. We will find out the details.

This should not have...(happened). The timing of the raid is most unfortunate," Singh said reflecting the Centre's anguish over the raids.
Congress ministers in UPA including P Chidambaram, Kapil Sibal and Kamal Nath strongly disapproved of the CBI searches, as the Centre distanced itself from the action, saying it was not aware of it.

Asked if he thought the CBI raid was part of a "political vendetta" as described by Stalin, an enigmatic DMK chief said, "Generally DMK is being subjected to acts of political vendetta. This may be or may not be one of such acts."

He, however, indicated he believed that the action had been taken without the government's knowledge as claimed by central ministers.

"If the Central Minister says that the raids happened without the knowledge (of the government), I cannot say I cannot believe it," Karunanidhi said replying to a question by reporters in Chennai. DMK, which pulled out of UPA on Tuesday, withdrew its ministers yesterday.

Under fire for conducting searches at DMK leader M K Stalin's house, CBI tried to defend its action saying it was "strictly" in accordance with procedures and there was no intention whatsoever to target any particular individual.

Amid uproar and displeasure made evident by political leaders, the CBI team pulled out of the residence of Stalin and its top brass even suggested that the team was never intended to go inside the residence.

The CBI came out with a statement explaining why the searches were carried out in a case of imported vehicles registered yesterday.

It said that a case had been registered under various sections of IPC including criminal conspiracy, forgery, cheating and abuse of official position.

It pertains to a complaint that about 33 vehicles had been imported in Tamil Nadu and out of these, certain vehicles are believed to have been imported and subsequently sold in violation of import provisions causing loss of up to Rs 48 crore to the exchequer, the CBI said.

The case has been registered against an importer and a senior intelligence officer of DRI who allegedly did not take any action even after identification of vehicles at the premises of certain users and unknown others.

During the searches conducted at 18 locations today, 17 imported cars have been located and seized, the statement said and added that searches are continuing.

"CBI wishes to clarify that the operation was strictly in accordance with procedures and there was no intention whatsoever to target any particular individual," the statement said.

Stalin (60), considered a political heir to 88-year-old Karunanidhi, dubbed the CBI raid as a 'political vendetta' and said he would face the case legally.

BJP said the CBI action is an example of "blatant" misuse of power by the UPA government for its survival and proves that it uses the probe agency to muffle allies who are walking out of the ruling coalition.

The issue was also raised in Parliament with BJP leader M Venkaiah Naidu alleging that the party which withdrew the support to the UPA Government was raided by CBI and said it meant the government "controlled" CBI.