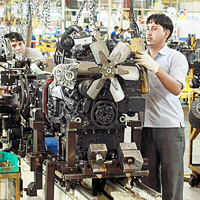 Extra Time
The global slowdown has its impact on India too. ArcelorMittal and Jindal Steel and Power (JSPL) have requested Orissa to renew their respective memorandum of understanding (MoU) for their proposed investments. JSPL applied for an extension of its MoU by three years after it lapsed in November 2011 and ArcelorMittal wants five years added to its MoU that expired last month.


Oil Flaws
Fears of an Iranian supply disruption pushed Brent crude close to $114 a barrel on Thursday. The rise comes amid the European Union's move to stop imports from Iran over its nuclear programme. Oil for February settlement, however, fell 0.2 per cent to $112.49 a barrel on the London-based ICE Futures.

Green Signal
Finally, the Centre has okayed Reliance Industries' $1.53 billion investment plan for developing four satellite fields in the KG-D6 block. The approval for the project to boost output in the  block had been in the waiting for two years.

Poor Spends
Research firm Gartner has revised its global IT spending forecast for 2012 downwards from 4.6 per cent to 3.7 per cent, thanks to weak economies and the Thailand floods. Gartner says the floods will cut supply of hard disk drives by 25 per cent or more during the next six to nine months.

Yahoo's Pal
In a bid to turnaround its fortunes, Yahoo has named former PayPal president Scott Thompson as its chief executive officer. The e-commerce expert's successful stint at eBay's online payments division, PayPal, is believed to have earned him the job. The search engine is mulling the possibilities of being sold, taken private or broken up.

High Stake
Private equity and venture capital investments rose 41 per cent in 2011 over the previous year-the highest since 2007. There were 427 deals worth $11.2 billion, compared to 328 investments worth $7.96 billion the year before.

Swipe Error
The State Bank of India cancelled its proposed joint venture with US-based Visa and Elavon to build point of sale terminals — devices used to swipe credit and debit cards for electronic payments — across the country. No reasons were given, but it will now build the network on its own.