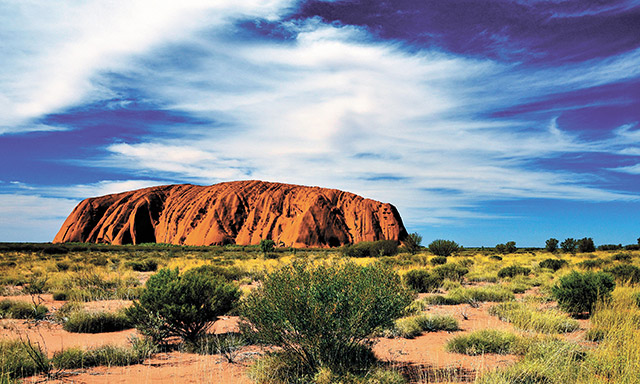 10 March, 2015
Print this article Font size -16+
It was somewhere on Stuart Highway, that scythes through the heart of Australia, that I finally came to terms with the enormity of the world’s largest island. The 3,000-km-long highway, that connects Darwin in the Northern Territory and Adelaide in the south, is named after John McDouall Stuart, the first explorer to successfully map this inland route in the 1860s.

It had been an hour since I spotted another vehicle on this highway and my mobile phone had gone from communication device to entertainment device. There’s a good reason why the locals call this ‘Never Never’ and this road trip lived up to all the imagery that one associates with Australia’s Outback.

The Northern Territory is one of Australia’s largest states. It is more than 40 per cent the size of India but is home to fewer people than one of Mumbai’s suburbs (a population of less than 2.5 lakh). Needless to say, it is one of the world’s most untouched landscapes, a treasure trove of spectacular natural sights. My journey began at the state’s capital, Darwin, a pretty coastal city with a gorgeous wharf — perfect for those strolls to catch the sunset. The city’s food culture is heavily influenced by its proximity to South-east Asia, a row of eateries along the wharf precinct dish out scrumptious sea food.

The contrast between Darwin’s cool tropical blues and Litchfield Park could not have been starker. Litchfield Park lies two hours away from Darwin — the ideal day trip. Litchfield’s termite mounds are its biggest draw. Rows of magnetic termite mounds (about two metres tall) dot the park landscape. Built by the same termites that can wreak havoc in damp attics, these mounds are incredible architectural feats replete with arches, tunnels, chimneys, insulation and nursery chambers. The mounds are aligned north to south in a bid to reduce exposure to the sun. You can easily mistake these mounds for tombstones from the large viewing platform at the northern end of the park. Equally spectacular are the four-metre-tall Cathedral termite mounds just across the road that have stood for over a century.

Litchfield’s termite mounds have stolen the spotlight from the park’s equally compelling pit stops. Florence Falls is one such spot — you can take in views of these waterfalls even before you walk down the tricky downhill path. The cool waters provide the perfect oasis on a typically humid day. There’s also Buley Rock Hole that can be easily mistaken for a private jacuzzi with a cluster of small pools.

I was flooded with images of Australia’s biggest blockbuster — Crocodile Dundee (that grossed over $200 million in the 1980s) as I approached Adelaide river. This iconic film was shot around this region. Australia has a formidable population of salties (Australian for salt water crocodile). At about 450 kg and an approximate length of 15 feet, the salt water crocodile is the world’s largest reptile and has been at the top end of the food chain in these parts for thousands of years.

The cleverly named Jumping Croc Cruises takes you mighty close to these imposing creatures. Any closer and you might end up at the wrong end of the food chain. A large boat with viewing decks ensures that you can grab your ‘Jaws’ picture but the boat operators are understandably finicky about how you move around the boat. The seasoned staff dangle large chunks of meat in a bid to get the salties to make the jump; they eventually do. That’s when you need to have your cameras ready to capture that ultimate picture. That’s also when you realise that even the largest TV screens do little to capture the gargantuan size of these creatures.

Tour operators like Intrepid usually have their own network of campsites around the region and you always have the option of sleeping outdoors in an Aussie-style swag (bedroll). I eventually got over my phobia for snakes and chose to ignore local advisories about random dingo sightings (as we headed further south) and chose to sleep under the stars. I don’t think I’ve slept better, the odd ‘creepy crawly’ probably escaped my attention as I ascended to ‘alpha state’.

The Kakadu National Park, four hours from Darwin has a special place in Aboriginal folklore. It’s one of the oldest living cultural landscapes — the traditional owners Bininj Mungguy — have lived here for more than 50,000 years. The park is spread over a staggering 20,000 sq. km. and has six distinct seasons and seven regions with very distinct flora, including marshy wetlands with large lotus ponds. The Ubirr Rock area is one of the must-stops in this large park. Aboriginal paintings that date back 20,000 years occupy pride of place; one of the many reasons why Kakadu is now a world heritage site. The park also has a series of towering waterfalls such as Jim Jim and testing treks that lead to lookouts such as Nawurlandja with sweeping views of the landscape.

Stuart Highway’s halfway point and Australia’s most central city, Alice Springs, is not far away from the Tropic of Capricorn. After a mandatory photo stop at the point where the latitude intersects the highway, it was time to head to ‘Alice’, home of Australia’s legendary Flying Doctors. There’s a small museum that celebrates this unique and life-saving network in the city while the Todd Mall area is a great place to stop for aboriginal art. Alice Springs is also the gateway to one of the country’s most spectacular sights that is slowly becoming one of the country’s most photographed landmarks.

Uluru aka Ayers Rock has long been a mythical symbol of Aboriginal culture. Often referred to as Australia’s Red Centre, it is one of the world’s largest monolithic structures along with the Sugar Loaf Mountain in Rio de Janeiro. Ayers Rock took its name from the chief secretary of South Australia in the 1870s — when it was first sighted by the Europeans. It was only in 1993 that this sandstone formation reverted to its original Aboriginal name. Uluru has a circumference of 9.4 km and rises 348 metres above the ground.

Sunset or sunrise?  I chose both. First it was the dying moments of the evening when the dark brown gets transformed into fiery ochre and then I arrived back in time for the sunrise even though it meant waking up at 4 am. Uluru is equally spectacular at both these times of day and, if you’re lucky, occasional clouds can add an element of drama to your picture. While there is no formal restriction on climbing Uluru, the local Anangu people consider it a sacred site, expecting the same veneration from visitors. I opted for a walk with an Anangu guide around the base just after sunrise and was transported to another time and place. A fascinating realm of Aboriginal legends and tales. It’s easy to be mystified by Uluru’s allure. Ask me.

The author is a  Chennai-based freelance writer