Out Of Coverage Area 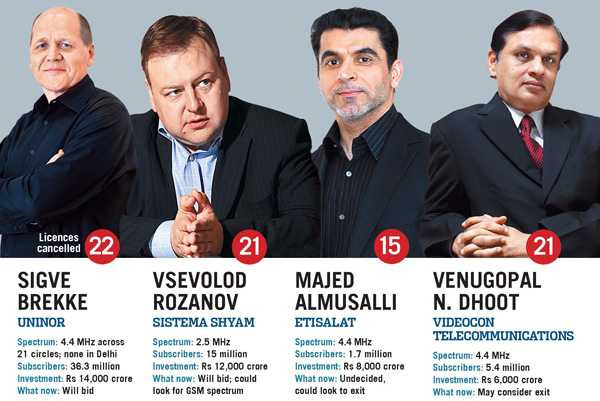 Those are some of the grave scenarios that will play out over the coming weeks after the Supreme Court verdict, cancelling 122 2G licences awarded to eight operators in 2008, threw India's telecom industry into its biggest crisis. Here is why the government must take charge of the situation before the colossal Rs 43,500 crore investment goes down the drain.

Policy Pangs
Even as each affected telco readies to file a review petition, the government stays aloof. "The court has declared it. We are not going to appeal. Corporates may go for it," corporate affairs minister Veerappa Moily said on 7 February.

The bureaucracy is going through its own policy pangs while the telcos, along with 100,000-odd dealers, suppliers, vendors and distributors are no wiser. The fount of the process of new licensing will be the regulator Trai. It has floated a discussion paper asking  for responses by February 15. However, as of February 10, only Uninor has submitted its suggestion that Rs 1,658 crore be the reserve price for 6.2 MHz of spectrum. "We will come out with recommendations by the first week of April," says a Trai source.

Meanwhile, companies continue to fret. First, who will be allowed to bid in the auction? "All operators should be allowed. Else, incumbents will go to court," says the representative of a leading telco. "Why don't incumbents pool their spectrum also in the kitty and then bid?" asks an official from a company that lost its licence.

At least the SC judgment is unambiguous on this: "The Central government shall consider the recommendations of Trai... and fresh licences be granted by auction." By linking fresh licences with auction, the SC's intention is to exclude the incumbents who cannot be given licences when they already have one. Hence, by all indications, the auction will be between the eight affected licencees and any new player.

The next issue is how much of spectrum will go under the hammer? Is it 4.4 MHz, the start-up spectrum they got with the 2008 licences? Is it 6.2 MHz that every player could expand to on the basis of subscriber base? Or, is it 10 MHz that many players have?

"In its recommendation of August 2007, the Trai had noted that spectrum beyond 6.2 MHz and up to 10 MHz in GSM had been given in some cases within the entry fee, without extra one-time charge and that they were not recommending an auction of the 2G spectrum for new entrants as there needed to be a level playing field," says AZB's senior partner Ajay Bahl, who represents Uninor. Experts, how-ever, are veering to the view that there should be open bids for every 1 MHz in each circle.

Next, every bidder is keen to know what happens if a player is unable to win spectrum in his circle? Will his subscribers migrate to a new player, and at what cost? Or, can he adopt the super-distributor or MVNO model that Virgin

Mobile adopted with Tata Teleservices? More importantly, how will any of these decisions tie in with the telecom policy already in the works and with the licence renewals that are coming up in 2014-15? Any deviation from a hastily created policy now and the two new norms may expose the government to a fresh round of litigation.

Shaky Telcos
Of the eight telcos, Tata Tele and Idea are among the least impacted, losing three and 13 licences (only seven operational), respectively. However, both have called it an unfair cancellation, expressing an intent to file a review petition.

Among others, Norway's $17 billion-Telenor and Russia's $28 billion-Sistema are digging in their heels, demanding a level-playing field in the new auctions. Both may invoke Bilateral Investment Protection Treaties if the high auction prices jeopardise their investments. "We are likely to work it through our government," says Majed Almusalli, chief project officer of Etisalat Telecom. "It's not the end of the road. There are facts that could not have been brought to the court's notice before by Uninor," says Bahl.

Of the other four, Bahrain's Batelco has just announced its exit from S-Tel after selling out to partner C. Sivasankaran. "Batelco had wanted to get out last year. They were not happy with things here," says V. Srinivasan, chief executive officer of Siva Group. Industry observers expect the other three to demand a refund of the Rs 1,658 crore paid for the licence, cut their losses and write-off their investments.
break-page-break
"Whatever noise they may make right now, they will exit. It's an opportunity to close operations and make a respectable exit," says the CEO of a global bank who has handled cross-border telecom investments. UAE's Etisalat has announced a $827 million impairment charge on its balance sheet as per IFRS norms but is keen to hear out the new rules. Videocon's V.N. Dhoot has invested Rs 6,000 crore but has maintained a studied silence, keeping everybody guessing. Essar-controlled Loop Mobile, which has spent Rs 2,000 crore, has only said it will seek a judicial review.

Base Price Conundrum
"How this is priced is really a decision for the government. Do you want tariffs to remain affordable, do you want more and more people to afford a cell phone? Or are you happy with how it was 10 years ago?" asks Sigve Brekke, managing director of Uninor.

But all hopes of the low base price are likely to be dashed because an edgy bureaucracy and the Trai will play it safe by keeping a high base price. "Forget about Rs 1,658 crore (price at which the cancelled licences were awarded) as the base price for auction. It will be somewhere between Rs 3,500 crore (the 3G base price) and Rs 8,285 crore (the base price Trai recommended for 6.2 MHz in May, 2010).

That Trai chairman J.S. Sarma is retiring (unless he gets an extension) in May 2012 adds a new dimension. Especially, since the process of holding an auction will be based on Trai recommendations. "He is not going to overturn the Trai's stated stance (base price of Rs 8,285 crore) on this issue. Nobody wants to retire in jail," says the head of a large audit firm.

Even the optimists believe 2G auction, which got more complex after the SC verdict, would not be possible within the four-month timeframe set by the court. The 3G auction took eight months to complete from the date of the first Information Memorandum. That is, once NM Rothschild, the firm that conducted the auction, itself was chosen after six months of beauty parade.

In this case, eight days since the ruling, the government is yet to make its first move towards appointing the firm. "In all likelihood, the government will stick to Rothschild," says a Trai source. "It's one thing to say conduct the auction in four months. But if you do that, you can act in haste and repent in leisure," says the CEO of a firm experienced in conducting such auctions globally. "This is going to be different from 3G auctions. The government needs to think through what it wants to achieve."

Banks In Freeze Mode
Expect India's banking sector, which claims to have lent Rs 30,000-35,000 crore to the telecom sector, to go into a freeze mode on incremental lending. Especially, since the biggest —State Bank of India — already has a Rs 20,000 crore exposure to the sector, of which Rs 12,000 crore was lent to the affected companies. According to SBI's deputy managing director Santosh Nair, "incremental exposure" to the sector will depend on how banks perceive the risks. What if a few foreign players wind up shop and quit? "They can do so only after paying back the loans" because there are group-wise guarantees, he says.  A CEO of a bank who has handled cross-border telecom investments says there is no business rationale for the new entrants because the incumbents have become too big and too strong. "Incumbents will keep getting stronger. Market will value them higher," he says.


"There are too many variables at play. Banks will seriously take a look at the risk profile of the  sector," says the CEO of a global bank in India.

As BW goes to press, sources say the Reserve Bank of India has asked all banks to furnish details of their loans to telcos by February 10. "A full-fledged review is on. We want to ascertain the health of these loans, and how banks are to treat (from a risk point of view) the sector," says a source. "In a worst-case scenario, banks will take a hit of Rs 3,000 crore due to the cancellation of 2G licences," he adds.

Vishwas Utagi, secretary of the All India Bank Employees Association, however, rubbishes the banks' Rs 30,000 crore claim. "Total loans amount to Rs 1,00,000 crore and have been lent on mere licences as security. They are in danger of going bad," he says. These banks are SBI, Punjab National Bank, Bank of India, Union Bank of India, Canara Bank, Syndicate Bank, Corporation Bank and Allahabad Bank.

Meanwhile, brace up for more on this front. As we go to press, another PIL (public interest litigation) has been filed — questioning the licences given out in 2001, taking a cue from the SC judgment, which implied that the SC had gone into the issue of 2008 licences only because nobody questioned the previous licences. Whichever way the auction goes, the biggest impact undoubtedly will be on the user. "Customers were enjoying the lowest tariffs in the world. I don't rule out even doubling of existing tariff," says Vsevolod Rozanov, president and CEO of Sistema Shyam TeleServices.