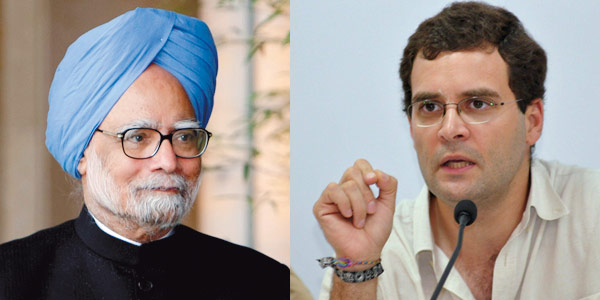 08 November, 2014
Print this article Font size -16+
Inching towards withdrawal of the controversial Ordinance on convicted lawmakers, Congress top brass including Prime Minister Manmohan Singh and party chief Sonia Gandhi today (2 October) grappled to work out a face saver in the wake of a huge political storm over Rahul Gandhi's public outburst against the measure.

All pros and cons were discussed and a decision was left to the Union Cabinet which is meeting in the evening (2 October), highly placed party sources said after the hour-long Congress Core Group meeting headed by Sonia Gandhi.

The sources said that the government is mulling whether to withdraw the ordinance - which was sent to President Pranab Mukherjee after the Cabinet had cleared it- or ask the President to take a call on it.

Mukherjee is said to have reservations over the Ordinance to provide immunity to MPs and MLAs from immediate disqualification overriding a Supreme Court judgement on the issue.

The day of hectic activities in the Congress began on the issue with Rahul Gandhi calling on the Prime Minister in the morning and holding one to one interaction during which the Congress Vice President explained to Singh the context in which he denounced the Ordinance.

Though Singh said he does not get "upset easily", he had indicated his unease yesterday when he told reporters that he would try to find out the reason why Rahul made a public statement and "why it had to be done that way".

"I am not the master of what people say. It has happened and as I said when I go back I will try to find the reason why it happened that way and how do we handle it," he had said.

He was asked about Rahul's remarks that the Ordinance was "complete nonsense" that needs to be "torn up and thrown away".

Meanwhile, a senior party leader speaking on the condition of anonymity said that it is not necessary that a decision is taken immediately after the Cabinet meeting today as it could give an impression of the Prime Minister's authority being eroded.

The matter may also be deferred for a view by the UPA Coordination Committee after the Cabinet makes up its mind, the leader said. There is a also a view in the party that the "Ordinance is now history" after Gandhi's carping criticism of it.