Opening A Door Of Opportunity 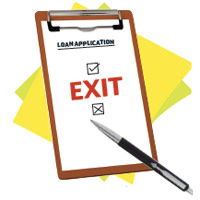 08 November, 2014
Print this article Font size -16+
Ever been bothered by the fact that you are locked into a bad loan deal, but can’t do anything about it? Well, relief is round the corner. The Reserve Bank of India (RBI) wants banks to evolve a system wherein you and I will have a ‘with exit’ and ‘sans exit’ option when entering into a contract with the bank. The exit option is to be priced “differentially but reasonably”, easily exercisable and come with few time constraints or other hurdles. According to RBI, “This will serve as a consumer protection measure and also help enhance competition”. What the RBI is saying is that the freedom given to home-loan borrowers to pre-pay on the floating rate or to switch to another bank has to be made universal. The RBI is also for penalties on banks that do not cooperate with borrowers in this regard. It is sure to make banks jumpy, but who cares? RBI has put a smile on your face.

It’s No-Action As Action
Giving dissenting  voters the option of NOTA (none of the above) this general elections wasn’t enough. Several villages and hamlets decided to boycott the polls altogether because the development promises made to them — over the years — have not yet been fulfilled. The reasons vary — land issues, resettlement and pollution for 5,000 voters in Haryana, lack of pay for the 1,000-odd tea estate workers in Jalpaiguri (West Bengal), no water supply in 15 years for 13-plus villages in Belgaum (Karnataka). There have been over 30 instances of such boycotting noted so far. It’s time the world’s largest democracy takes note of this loss in faith in the Indian electoral process, and puts in more effective processes such as the right to recall, instead of just NOTA.

Inconsistency has been the hallmark of the Election Commission (EC) in the ongoing electoral process. While nothing stopped it from taking a hard line with the Mamata Banerjee-led West Bengal government on the transfer of some officials, it has done little by way of curbing politicians from making one communal statement after another. The media spotlight forced its hand in the case of BJP leader Giriraj Singh — he faces arrest for his hate speech. But with regard to Amit Shah, Narendra Modi’s right-hand man in UP, senior SP leader Azam Khan, BJP leader Praveen Togadia and Shiv Sena member Ramdas Kadam, it has not gone beyond a rap on the knuckles. Their speeches are cognisable and punishable offences under the Representation of the People Act, 1951, and the Indian Penal Code. The EC takes recourse to the ‘due process’ argument when it suits it and cracks the whip when it wishes to. It’s high time the EC realises that its job of poll regulator includes tackling communal elements.

Preparing For A Rainy Day
Complementing the rising tempo of election rallies, the market is rallying as well — triggered by the hope that the ongoing polls will put in place a stable, pro-economic reform government. At an all-time high, the Sensex has gained over 1,100 points (or 6 per cent) since January. Retail investors, too, seem to be warming up to the idea of investing in equities. Amid all this euphoria, though, a section of fund managers has begun working on alternative investment strategies to cushion a possible market crash, should the poll throw up some surprises. According to fund managers, a fractured mandate and a pro-social reform government could trigger a deep market correction. Cautious money managers have started part-allocating money to “old defensives” (slow-moving low-beta stocks) in FMCG and healthcare sectors. Retail investors ought to take note of this.

Docomo Drops Call With Tata Teleservices
In a matter of months, two Japanese companies in diverse industries have exited prominent investments in India, due to an erosion in investment value. First Daiichi-Sankyo exited Ranbaxy, now NTT Docomo has decided to sell its entire 26.5 per cent stake in Tata Teleservices (TTSL). This culminates the 2009 agreement between Docomo, and TTSL and Tata Sons. Under the deal, Docomo holds the right to require that its TTSL shares be acquired for 50 per cent of the acquisition price — Rs 7,250 crore — or a fair market price, whichever is higher, should TTSL fail to meet performance targets. This could mean a new avatar for India’s seventh largest mobile operator, which has reportedly been on the block for a while. Rivals feel the Rs 20,000 crore debt on its books is a deterrent for a new investor. But if the deal includes Tata Communications, which has a 240,000 route km global optic fibre network, TTSL will be more attractive for any global telco.

A Little Too Late For Decisions
As far as exercises in futility go, this was the ace. Long after the 15th Lok Sabha’s term expired, the finance ministry published its draft of the Direct Taxes Code to replace India’s income-tax laws, as it had vowed to do last year. This came in April, 12 months after the parliamentary committee gave its suggestions on the Bill, at a time when the draft had lost all relevance, and the general elections had got under way. The UPA’s approach towards policy and taxation over the past three years has been quite appalling. An instance of its apathetic attitude to such issues was the retrospective amendment of the I-T Act in 2012, which dealt a blow to Vodafone, which had to suddenly cough up taxes for the Hutch takeover in 2007, even after the Supreme Court had exempted the firm — making other foreign investors wary of pumping money into India. It seems the government is more interested in ticking off its checklist for the current term, without any intention of making significant policy decisions that will address serious problems.

Making It Official
Should India legitimise lobbying? As it currently stands, lobbying isn’t illegal, but then, it isn’t looked upon very highly either. Take for instance when Walmart admitted to paying lobbyists to influence policy in India. At the time, Opposition politicians read the move as bribery (which may or may not have happened). As a result, lobbying happens, but stays in the shadows. Processes that fall in the grey category — with undefined rules and structures — always prove to be more harmful than not. The government should acknowledge that an attempt to influence policy will never cease. Legitimising lobbying will enable the public to know the lobbyists and their agenda. Tight regulation — as is done in the US — can ensure that the eventual decision is based on a fair assessment. It may not be a bad idea for the Indian government to take such a non-traditional view of the situation, vis-à-vis India Inc.

Star-crossed Lovers
It’s a marriage that couldn’t last. The channel distribution JV, Media Pro Enterprises, between Zee and Star came to an end after three years. The JV was aimed at giving more bargaining power to the broadcasters with cable and DTH delivery services to enhance revenues. However, alliances between broadcasters to ‘aggregate’ or bundle channels was seen as monopolistic and banned by regulator, the Telecom Regulatory Authority of India. Soon after, the Media Pro JV was dissolved. This is the second abortive JV attempt by media behemoths. The previous one, Asia Today, in which the two groups beamed their channels jointly from Hong Kong, ended in 1999. This shows how difficult it is for competitors to form JVs.

SUVs Fail To Impress
Any hopes automakers may have pinned on the elections — the most expensive in Indian history, to be precise — seem to have been dashed. The sales of sports utility vehicles (SUV), which saw a decline in February and March, continue to be lacklustre in spite of a 6 per cent reduction in excise duty by the government and sops offered by dealers and manufacturers. During the 2004 and 2009 Lok Sabha elections, SUVs saw a steep jump of around 10 per cent, riding piggyback on bulk buys by politicians and parties for campaigns and rallies. This time, even that’s missing. The blame may be laid at the doorsteps of lazy politicians or more emphasis on social media campaigning. With every major car maker planning new SUVs in their portfolio, such disinterest among buyers may spell big trouble.

Slow, And Steady
It’s great to be optimistic, but pinning all hopes of India’s economic revival on the new government may be far-fetched. With industrial production falling 1.9 per cent in February, the biggest worry, now, is around manufacturing — which is under siege because capital expenditure has come to a standstill due to lack of investments in at least three years. According to government data, there was a lag in cumulative growth in the mining, manufacturing and electricity sectors during April 2013-February 2014 over the previous year. Hypothetically, even if demand for goods starts rising tomorrow on sentiments, the the supply will lag demand by at least 24-48 months — the time it takes for industry to ramp up capacities. So brace up for a long recovery, whenever it happens.

Engineering A Shortage
Healthy competition in any industry, including education, is usually good. So, the All India Council for Technical Education’s (AICTE) decision to bar the entry of new engineering colleges from 2014 is an indication of myopic vision. The ostensible reason given for the move was that existing seats have been going vacant and, in addition, fresh graduates have not been getting jobs, which has had an adverse impact on the number of applicants. Though, these are facts that cannot be refuted, the education sector will be better served if the AICTE puts in place quality checks for existing colleges and shuts down those institutes that fail to attract students— instead of preventing new entrants and the unexplored promise of fresh ideas in engineering education that they may have brought in. New players may also have served to increase competition. For now, though, the existing lot can rest easy.