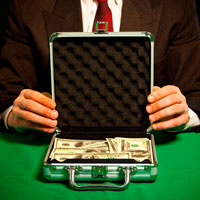 08 November, 2014
Print this article Font size -16+
In order to check black money and tax evasion, an online data bank is being setup by the Indian Finance Ministry for effective coordination and dissemination of various inputs pertaining to illegal funds.
The online system, which would act as data bank for financial intelligence sleuths, named 'Virtual Office' will help in monitoring of Suspicious Transaction Reports (STRs) generated by Financial Intelligence Unit-India, an agency tasked with receiving, analysing and disseminating information relating to suspect financial transactions to enforcement agencies and its foreign counterparts.
It will have a representative each from Central Board of Direct Taxes (CBDT), Directorate General of Revenue Intelligence (DRI), Central Economic Intelligence Bureau (CEIB), Directorate General of Central Excise Intelligence (DGCEI) and FIU-Ind.
India has lost a whopping $123 billion in black money during in last decade, according to a report by a US-based research and advocacy organisation on 'Illicit Financial Flows from Developing Countries:2001:2010'.
As many as 13,871 STRs were disseminated by the FIU-Ind during 2011-12. Of these, a highest of 10,956 were passed on to CBDT, 1,615 to Enforcement Directorate, 1,130 were shared with CBEC, DRI and DGCEI, 117 STRs were shared with Securities and Exchange Board of India (SEBI), 51 with Reserve Bank of India (RBI) and two with Insurance Regulatory and Development Authority (IRDA).
An STR is a transaction, of Rs 10 lakh and above, which gives rise to a reasonable ground of suspicion that it may involve the proceeds of a crime through drug trafficking, gun running, and illegal imports and exports of goods.
"It has been decided to set up a virtual office to monitor the feedback on the STRs disseminated by FIU-Ind. The Virtual office shall be provided administrative support by FIU-Ind," an order issued by Finance Ministry said.(MORE) PTI AKV
"The virtual office would enable any member agency to generate a profile of an evader or defaulter and trace his various activities. The exchange of information related to any STR, income and service tax evasion, and excise duty among others would become faster," a Finance Ministry official said.
A feedback report generated through the system will be submitted to Revenue Secretary, Finance Ministry every month.
"A closed user group (CUG) will be created on the National Informatics Centre (NIC) email portal for the members of the virtual office to interact with one another and for sending feedback to FIU-Ind regularly.
"For this purpose, all the nominated officers would obtain an NIC e-mail ID and communicated the same to FIU-Ind at the earliest. FIU-Ind shall thereafter create a CUG and inform its details to all the members of the virtual office," the order said.
The functions of the virtual office would be subsumed by the FINex portal of FINnet (the portal through which the law enforcement agencies would interface with FIU-Ind) as soon as it becomes fully operational, it said.
(PTI)
Tags assigned to this article:
economy india rbi black money news 7 income tax finance ministry cbdt tax evasion dgcei online data bank fruad illegal funds suspicious transaction reports virtual office ceib

Zaggle Gets Selected By NPCI, MeitY To Showcase Solutions At Digital India Week 2022