On this day in 2015: AB de Villiers smashed fastest century in ODIs

On this day in 2015: AB de Villiers smashed fastest century in ODIs

New Delhi [India], January 18 (ANI): On this day five years back, South Africa batsman AB de Villiers registered the fastest century in the 50-over format.
He achieved the feat against West Indies in the second ODI of the five-match series at Johannesburg. AB de Villiers registered the fastest 50 and 100 in the same match and the records stand to date.
The batsman brought up his century off just 31 balls and he surpassed New Zealand's Corey Anderson (36) to bring up the fastest century in ODIs. ABD was finally dismissed for 149 off just 44 deliveries in the match.
Taking to Twitter International Cricket Council (ICC) also shared the record and termed it as "insane innings". 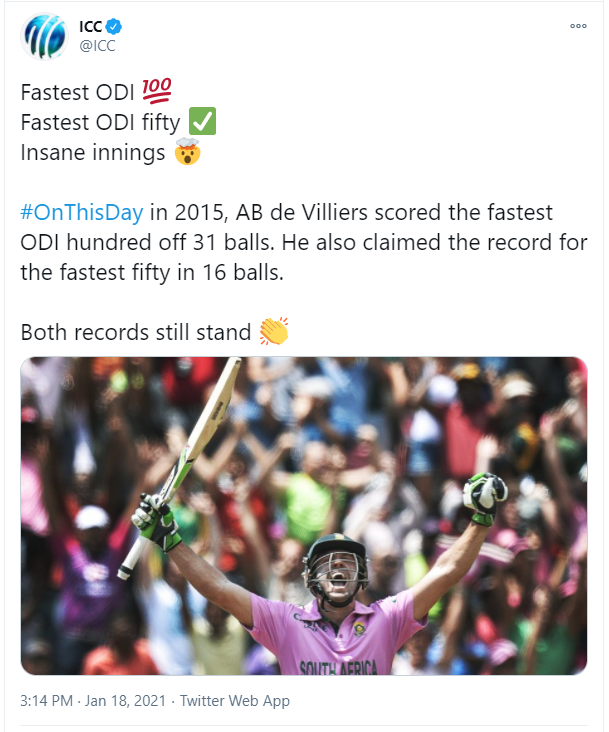 These heroics from 'Mr.360' enabled South Africa to post 439/2 in the allotted overs and they went on to defeat West Indies by 148 runs. Later in 2015, De Villiers recorded the fastest 150 in ODI cricket against West Indies during the 2015 ICC World Cup in just 64 balls.
Recently, De Villiers was named in both the ODI and T20I Teams of the Decade. (ANI)