On this day in 1997: Ricky Ponting scored his first Test century

On this day in 1997: Ricky Ponting scored his first Test century

New Delhi [India], July 26 (ANI): It was on July 26, 1997, when former Australia skipper Ricky Ponting went on to score his first Test century.
He achieved the feat in the 1997 Ashes series against England and he brought up his first century in the fourth Test of the five-match series.
"My first Test ton and an Ashes one, 23 years ago to the day. Being on 99 that day was the most nervous I think I ever was, but thankfully I had Matthew Elliott at the other end to help guide me through as he went on to a magnificent 199," Ponting tweeted. 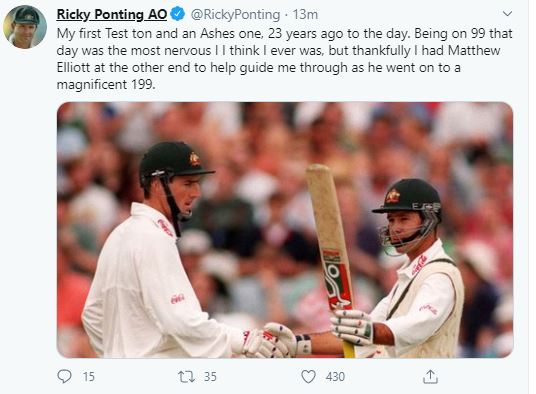 In the match at Leeds, Australia won the toss and elected to bowl first.
Jason Gillespie picked up seven wickets as Australia bundled out England for 172 in the first innings.
Australia was then in a spot of bother as the side was reduced to 50/4. But it was then that Ricky Ponting got together with Mark Elliot.
The duo went on to stitch together a partnership of 268 runs for the fifth wicket.
Ponting played an innings of 127 runs from 202 balls with the help of 16 boundaries and one six.
While, Elliot was clean bowled by Darren Gough on 199, and in the end, Australia declared its innings on 501/9, with a lead of 329 runs.
England was bowled out for 268 in the second innings as Paul Reiffel picked up five wickets for the visitors.
In the end, Australia won the match by an innings and 61 runs.
Ponting scored 27,486 runs for Australia in his international career and also led his country in all three formats.
No Australian has scored more international centuries than the former skipper.
Ponting also led Australia to two World Cup victories in 2003 and 2007. He played his last Test in 2012.
He is the second-highest run-getter in the history of the longest format of the game after finishing his career with 13,378 runs in Test cricket.
The former Australia skipper is currently the coach of IPL franchise Delhi Capitals. (ANI)