On Time, Every Time 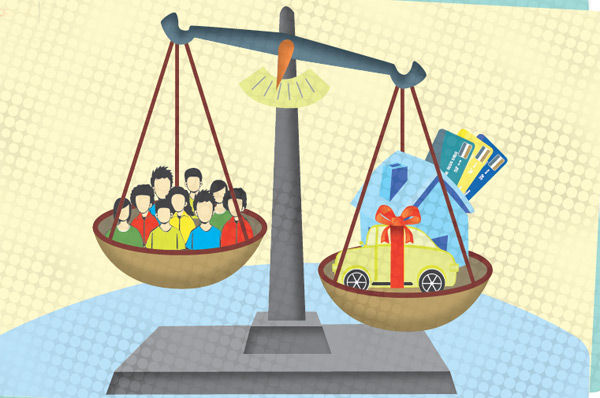 Little did you know that someone out there (not that enthusiastic bank agent who goaded you into taking a loan or upgrading to a gold credit card) is watching you closely and making a note of your debt and your repayment behaviour. And in his book, all the above instances qualify for negative marking.

These negative markings, over an extended period, could deem you a bad borrower. Your request to the bank for an overdraft facility, a small top-up loan or higher credit card coverage may get shot down because of your poor repayment record. And, on top of that, your credit history will not be in the limited knowledge of your bank, but will be hot-listed on request across banks and private lenders.

Irish writer and poet Oscar Wilde wrote: ‘A man who pays his bills on time is soon forgotten.’ But then there weren’t any credit bureaus then. Now, a bill paid on time is duly marked against your name by credit bureaus, and this bumps up your credit scores, making you more creditworthy.

Credit Score Scare
A credit score is a numerically derived expression that qualifies the creditworthiness of a borrower. It is historical in nature and is used by banks and other financial institutions while extending credit facilities to a customer. Consumers can typically keep their credit scores high by maintaining a long history of on-time bill payments, and not having too much debt.

CIBIL, Equifax and High Mark provide credit information to lenders in India. These agencies use statistical models to tell the lending agency how good or bad a borrower you have been in the past 3-4 years. The rating scale is normally between 300 and 999 points, with the bigger number being the better score.

“Most of the time credit bureaus analyse a ‘credit relevant period’ of 36-48 months. Nobody gets a perfect score; but customers with scores in excess of 800 are considered stable and good borrowers,” says Nimilita Chatterjee, vice-president of products at Equifax Credit Information Services.

“A credit score is just one of the many factors that banks consider while lending. The actual lending boils down to the level of credit risk that a bank can take while lending funds to sub-prime borrowers,” says Chatterjee.

“Also, ratings have different weightages across different loan products. So, a bank may issue credit cards to a person with lower scores, but never a home loan, which is longer-term in nature. Ratings are applied differently in secured and unsecured portfolios as well,” she adds.

According to various credit analysts, if a borrower is consistently overdue for 30 days, his credit score can drop by as much as 80-100 points, depending on how long the account has been open and when the last payment was made.

A score above 780 is considered good, while a score in excess of 829 could earn you the tag of an excellent borrower. On the downside, a score below 650 could land you in the ‘bad borrower’ books of the bank. Such a customer will have to provide a great deal of explanation (for his ‘bad repayment behaviour’) before getting a loan from the bank. Often, the bank simply denies credit facilities to the customer because of his low credit score (for more details on how to improve your credit score and the factors that impact it, see How To Go About It).
break-page-break
“Customers with a credit score in excess of 750 are preferred by most banks. Almost 80 per cent of banks disburse loans only to customers who have credit scores higher than 700,” says Harshala Chandorkar, a senior vice-president at CIBIL, which has over 900 empanelled members. “Factors that impact credit scores are: value of the debt, its timeline, the number of times a person has applied for loans, the number of other live loans and the number of missed payments or instalments,” she informs.

Banks are cautious when they issue credit cards. Despite this, instances of delayed payments and non-payments are relatively high in the cards vertical. Credit bureaus play a crucial role in bringing down card default ratios.

According to CIBIL records, in 2011, more than 80 per cent of the consumers who were granted a credit card had a score of 700 and above. Delinquencies on credit cards have significantly reduced in the past few years. One example of this is that the ‘90-plus days’ delinquency by amount has dropped from 2.82 per cent in the fourth quarter of 2010 to 1.62 per cent in the same quarter of 2011.

“There have been instances in the past (across various banks and financial institutions) where loan proposals have been declined because of low credit scores,” says Manavjeet Singh, senior president, retail banking, Yes Bank.

“A customer with a low score could have been a defaulter in the past with various banks. Such customers may miss payments in the future too; hence, these profiles would be charged a higher rate, with lowest amount of funding and lowest tenure. Such profiles are high-risk-high-return customers for any bank. A bank would decline them on the basis its own risk appetite,” adds Singh.

Banks have their own credit score cut-offs. Mostly, the cut-off depends on the kind of funding. An unsecured funding, like a personal loan, with no security, will have zero tolerance levels for low credit scores, and cut-offs would be much higher than for products that are more secure in nature, such as vehicle funding or home loans. Banks also keep an eye on credit scores while sanctioning relatively small consumer durable loans.

“Good borrowers get good rates. Though at the retail level, consumers do not negotiate for better rates on the basis of higher credit scores alone,” said K.V.S. Manian, president, consumer banking, Kotak Mahindra Bank. “But banks do come out with products specifically for customers with high credit scores.”

According to Manian, banks are jittery about providing loans to customers with credit scores below 650. “A lot of care is taken while lending to such customers. They are, at times, charged a marginally higher interest rate as well,” he adds.

Have It, Flaunt It
Credit bureaus have evolved in a big way in developed markets. In the US, almost all services — starting from banks to insurance companies, from telephone companies to even house owners with tenants — use ‘Fico’ credit scores. A Fico score above 800 would open the pursestrings of most lenders. Apart from easy credit options, an average American with a high credit score earns the right to flaunt his creditworthiness which, in turn, throws up several opportunities.

“Credit scores have evolved in the US. Customers use these scores to even negotiate loan rates and terms with banks,” says Anil Pandya, chairman of High Mark Credit Information Services. “It (credit scores services) is very small in India as of now. But there is huge potential. The scope of credit scores will widen in the years to come.”

There is no easy way to improve an individual’s credit score. The same can be managed or bettered by systematic repayment of loans. This, over a period of time (12-24 months), will lead to an improvement in the repayment track record and credit history.

It is good to be a bit old-fashioned when it comes to borrowing money from banks and other lenders. The best option is to borrow only when you really need to and repay (the debt) as if you have borrowed from your boss.