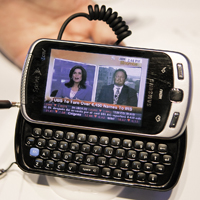 If you are a gadget freak, you would have tuned in to the news emanating from the Consumer Electronics Show (CES) in Las Vegas last week. As usual, it was an embarrassment of riches. Nevertheless, there were a few standouts and common themes that pointed to sea changes in technology. One of them was mobile TV.

Mobile TV is already a reality in some ways. Today, you can watch television clips on your mobile phone, and the netbook revolution has made sure that it is a satisfactory experience as well, if you define the term mobile TV as only watching television when away from home.
But it is not really the gadget alone that we needed to have, if you use the term in the truest sense. At the moment, you cannot watch streaming video clips if you are driving in your car, for example, or moving fast in a train. But probably not for long.
The problem, of course, seems self evident, but it is not. It is not a question of bandwidth or power or your gadget. It is all about the television broadcasting infrastructure. In spite of the growth of mobile gadgets for over a decade, it was only in October 2009 that the Advanced Television Systems Committee, a global, non-profit body developing voluntary standards for digital television, decided on a digital mobile TV standard. These standards were for both free and subscription-based television, and for interactive as well as downloaded video files for playback later. This was the fillip the manufacturers needed.
By now, several gadget manufacturers have launched different kinds of devices, and the next few months will see more of them. These will include laptops and netbooks, smartphones and car entertainment systems, not to speak of new gadgets such as pocket televisions. It does not cost much for the television broadcasters, who have already made the expensive transition from analogue to digital, to upgrade their infrastructure for the mobile television era.
At CES, LG Electronics was among the few companies who had demonstrated new mobile TVs. Costing $249, this gadget has a seven-inch screen, two sets of ear phones and a DVD Player and stereo speakers. It is supposed to provide 2.5 hours of battery for live television, and 4.5 hours for DVD player.
LG had co-developed the chip that the television uses, which explains why it was one of the first to demonstrate such a device. This device will be available later this year.
Also demonstrated at CES was a Dell Mini 10 netbook, which had a built-in digital television tuner. It will also be available in a few months. But you do not need to have such devices to watch television in your car.
You can use a converter called the Tivit to receive mobile TV broadcasts on a laptop or a mobile phone, provided your gadget can connect to a Wi-Fi network. Tivit broadcasts the television signal as a Wi-Fi signal, and your gadget can pick up this signal from a distance of about 50 meters. Tivit is made by South Korean multimedia products company Valups, and will cost around $100 in the US when available later this year.
So, 2010 seems set to be the year when mobile TV took off in the developed countries. The majority of broadcasters in the US have already signed up for mobile TV, and a large number of channels are expected to start broadcasting this year. It could take a little longer for mobile TV to arrive in India, but probably not too long. It is too big a revolution for India to miss.
(This story was published in Businessworld Issue Dated 25-01-2010)
Tags assigned to this article:
magazine techtalk broadcasting samsung lg gadget mobile tv dell mini p. hari