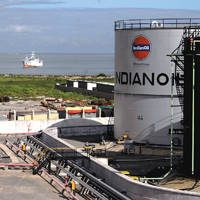 Indian Oil Corp (IOC) on 9 August posted the nation's biggest quarterly net loss of Rs 22,451 crore after the government failed to compensate it for capping auto and cooking fuel prices.

With losses widening to Rs 3.56 per litre, public sector oil firms on 9 August sought an immediate hike in petrol price but were unsure if the government will allow them to do so. (Read: Oil Cos Seek Immediate Hike In Petrol Price)

State-owned oil firms had last hiked petrol price by Rs 0.70 per litre with effect from July 24 and since then global oil rates have soared more than $12 per barrel.

"We are losing Rs 1.37 per litre on petrol based on the average price of benchmark gasoline rates in the Singapore market in the previous fortnight. But current calculations based on oil price this month will be about Rs 3.56 a litre," said R S Butola, Chairman, Indian Oil Corp, the nation's largest fuel retailer.

The government has in the year not compensated oil firms for selling diesel, domestic LPG and kerosene below cost this year as the Rs 40,000 crore fuel subsidy it had budget has all been exhausted in paying compensation for last fiscal.

IOC, which like other retailers is living off borrowed money, warned that it may soon exhaust the limit to which it can take debt and sourcing crude oil (raw material for making petrol, diesel and other petroleum products) would become difficult as international sellers don't give credit.

The three state-run fuel retailers are losing about Rs 710 crore per day on selling diesel, domestic cooking gas (LPG) and kerosene at government controlled rates which are way below market price.

Besides, the government's "inflationary concerns" have not allowed them to raise price of petrol - a fuel that was deregulated in June 2010 - even though they are losing over Rs 3 per litre.

IOC Chairman R S Butola said the government should realise that oil firms are on the brink and fuel subsidies need to be addressed urgently.

Butola said IOC's borrowings also rose because the government has not released Rs 4,800 crore out of the Rs 20,800 crore of fuel subsidy promised for 2011-12 fiscal.

Besides losing Rs 383 crore per day on sale of diesel, domestic LPG and kerosene at government controlled rates, IOC is also losing Rs 1.37 per litre on petrol - a commodity which was deregulated in June 2010.

Of this, it got Rs 8,041 crore from upstream firms but the government failed to provide Rs 22,451 crore on fuel subsidy.

Together with Rs 950 crore of loss on petrol, the company's revenue loss on fuel sale in April-June quarter was Rs 18,435 crore.