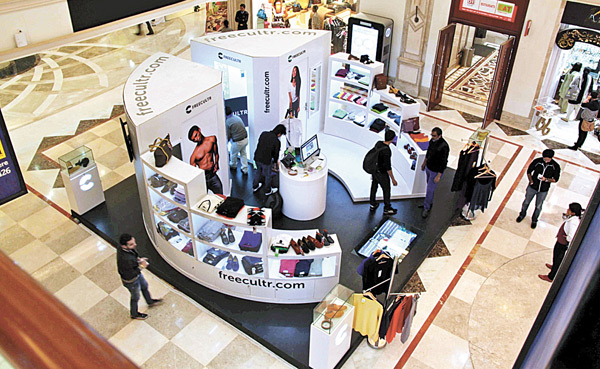 08 November, 2014
Print this article Font size -16+
Any time, till the first week of February, if you walk into the swanky DLF Promenade mall in New Delhi, you will find a kiosk in the centre of the mall, attractively displaying garments and accessories. But these aren’t for sale, mind you; just to see and familiarise yourself with the products and processes. Set up by year-old etailer Freecultr.com, this is its first ‘pop-up store’ to get hesitant consumers to start shopping online.
The assistants at the kiosk walk consumers through the process of shopping online, availing exciting discounts and buying products. Since its launch on 21 December, the pop-up store has already spiked new shoppers on its website by 70 per cent. “The idea was to get feedback on the products, brands, price points directly from the consumer,” says Sujal Shah, CEO and co-founder of Freecultr.
The pop-up trend for etailers started early last year, and has picked up pace over the months with increasing success. Brands use these temporary spaces in malls to engage with their customers and establish an interest in their products. “Pop-up stores create a touch-point for a business that is largely impersonal. They provide customers a sense of gratification that helps them in their purchasing decisions,” explains Chaitanya Aggarwal, founder-CEO of Juvalia & You India.
Since it launched in India last year, Berlin-based jewellery etailer Juvalia & You has set up several pop-ups. It tries to do pop-ups every weekend at popular malls in big metros since such efforts result in a subsequent increase in organic traffic on the website. These 150-200 sq. ft stores allow customers to place orders and have products delivered at their doorstep. “These serve a dual purpose of allowing us to showcase our products to the existing network of stylists and also spread awareness about the brand to the customers,” says Aggarwal.
Similarly, Pernia’s Pop-Up Shop, a portal offering clothes and accessories, has taken its pop-up stores to Ludhiana and Delhi. Its founder Pernia Qureshi says, “The aim is to target customers who aren’t as Internet-savvy, yet like to keep themselves updated with the latest trends.” Along with the metros, Qureshi experimented with a smaller city like Ludhiana, which has a fashion-savvy populace, but not many options. So, while Qureshi’s Delhi customers, “with access to high fashion, saw the store as a one-stop shop for their favourite designers, the Ludhiana customers got their chance to shop at a wholesome fashion store”.
Brand and marketing expert Jessie Paul, CEO of Paul Writer, says, “With e-commerce being new here, customer hesitation is based on a lack of trust. They don’t trust the idea of online transactions.”
These pop-up stores are also a good way of introducing a new online brand to consumers, as lifestyle products portal SquareKey found out. The firm launched its website along with a pop-up store in Mumbai in December, hoping the move would translate into future online transactions.
And the experimentation continues globally. The latest was at mega etailer eBay’s pop-up shop in London around Christmas. The shopping portal recognised the power of friend recommendations and integrated social networks with its pop-up store, wherein shoppers would endorse products bought on eBay directly on their Facebook and Twitter timelines.
With the current generation already well-connected online, these ‘offline’ pop-up measures seem just the push that others need to join in.