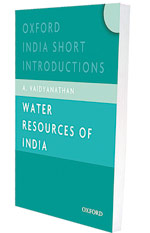 08 November, 2014
Print this article Font size -16+
A Vaidyanathan is one of India’s foremost agricultural economists. Water has been one of his areas of specialisation; he has earlier written two books on irrigation in India. In Water Resources of India, (OUP), he begins with basic facts about water. One learns, for example, that the average precipitation on all the land in the world is 836 millimeters. Not all of it is water; 97 mm is snow.  498 mm of it evaporates from land or is transpired by vegetation — the vegetative equivalent of sweating. Of the remaining 338 mm, about an eighth flows down rivers and streams, and twice as much sinks underground and replenishes the aquifers or flows somewhere else. Since the area of all the land on earth is 148 trillion square metres, it receives roughly 120 trillion cubic metres of precipitation. The capacity of all the dams in the world is 13 TCM; even in the best years, only about 10 per cent of the precipitation is stored.

The author then goes on to give the basic facts on India’s water resources, their use in agriculture and efficiency of utilisation. He then quickly surveys problems of water management,  the resulting inequality of water availability and conflicts over distribution. Finally, he makes his own suggestions about how these conflicts may be managed and ameliorated. Altogether, this is an efficient, economical introduction to India’s water resources and problems.

Indian Rupee Firms On Inflows Ahead Of US Inflation Report

India Could Emerge As Asia's Strongest Economy In 2022-23: Morgan Stanley