Of Routes And Rights 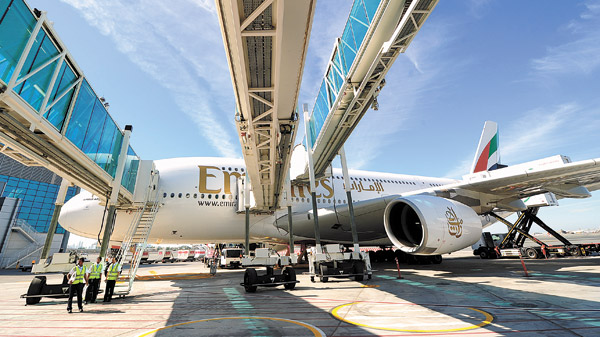 08 November, 2014
Print this article Font size -16+
Here’s a quiz for Middle East experts. What’s the population of the United Arab Emirates? Hands up all those who said 8 million. And now a googly: How many people fly to the UAE from India each year? The answer is about 9 million. Of this, 7.3 million fly to Dubai, while the rest go to Abu Dhabi, Sharjah and Ras Al Khaimah.

If these numbers seem out of whack, considering the size and population of the UAE, there is an explanation. About 74 per cent of these are passengers from India — according to the Association of Private Airport Operators (APAO) — stop only for a few hours at Dubai, Abu Dhabi and Sharjah before flying on to far-flung corners of the globe.

The Indians pouring into the UAE tell the whole story about the fierce battle for outbound traffic from India. The winners of the latest round are the cash-rich carriers of the Arab Gulf which are shooting rivals — both from India and Europe — out of the skies. “India is the largest market on our network with 185 flights per week from 10 cities,” says Essa Sulaiman Ahmad, vice-president, India and Nepal, at Emirates Airline.

Every week about 150,000 air travellers leave India, head to the Gulf or transit from there to other corners of the globe. That number is about to rise dramatically now that Etihad has taken a stake in Jet Airways and a new bilateral has been inked between India and Abu Dhabi increasing the number of seats to 50,000 passengers per week, compared to 13,300 earlier. The Jet-Etihad combine is expected to walk away with the lion’s share of the new capacity.

But Etihad isn’t the only Gulf airline that is taking a bigger stake in India. Last December the quota between India and Muscat was hiked from 11,550 to 16,016 at the insistence of Oman Air.

Inevitably, Emirates, the Dubai-based giant of the Gulf, will not let anyone else fly past it without a fight. It has been aggressively demanding a new round of bilateral talks to raise the number of seats between India and Dubai to 90,000 weekly from the current 54,200.

Emirates, which has a fleet of 190 planes, even commissioned the National Council of Advanced Economic Research (NCAER) in 2012 to turn out a study that pointed out how it added $596 million to Indian coffers.

Aviation industry consultancy Centre for Asia Pacific Aviation (Capa) says other airlines such as Qatar Airways, Turkish Airlines and Singapore Airlines are all waiting in the wings, seeking an expansion of bilaterals as they have exhausted their current entitlements.
All these carriers have been quick to figure out that India’s second-rung cities are on a swift growth path and worth flying into. It’s also cheaper flying to these airports because the landing fees are lower than Delhi or Mumbai. So, for instance, you have seven Gulf-based airlines flying to a relatively small city like Kozhikode.

Or, take a look at Qatar Airways which flies from 12 Indian destinations, including Nagpur and Ahmedabad. There is speculation that Qatar Airways could be looking at a tie-up with an Indian lowcost carrier. Then, there’s the Sharjah-based lowcost Air Arabia which flies to 11 destinations and wants its seat quota hiked from 18,000 to 30,000. Crucially, all these airlines are flying with load factors of 80 per cent to 90 per cent. “Air Arabia has fully utilised its seat allocation granted two years ago. We would like to operate to as many airports as possible after receiving additional rights,” says Adel Ali, group chief executive officer of Air Arabia.

Etihad already flies to 13 destinations and its new partner Jet has now applied to fly from 23 destinations to Abu Dhabi over a three-year time frame. As an added incentive for Indian passengers, Abu Dhabi International Airport will also be offering immigration pre-clearance facilities to the US — meaning they can do all the visa formalities at Abu Dhabi before boarding.
break-page-break
In addition, Dubai’s lowcost airline Flydubai, which has 17,000 seats from India per week, is also flying full from Ahmedabad, Hyderabad and Lucknow. It has found that fliers from cities such as Mumbai and Delhi are not averse to hopping to Lucknow or Ahmedabad to take Flydubai flights that are 25 per cent cheaper. A Capa report estimates that if all the demands of airlines like Emirates, Qatar Airways and Air Arabia are met,  including the Abu Dhabi seat hike, passenger numbers to the Gulf will rise to 300,000 per week — double the current level. Says Axel Hilgers, South Asia director at Lufthansa, “India has contributed massively to the enormous success of the South-west Asian aviation industry in the past decade. Unfortunately, this success did not take place in India. It took place at the hubs of the Persian Gulf, where the aviation sector was strategically supported by the respective governments.”

In A Tailspin
So who are the big losers as Jet Airways goes speeding out to Abu Dhabi? The answer is: just about all the big players in the Indian aviation industry, starting with Air India (AI), which is seeing its ambitious comeback plan shot to pieces on the runway before it has a chance to get into the air. Says a Capa report: “The impact of the Etihad-Jet combination will be devastating for the country’s largest international carrier, Air India. This surely must be the last nail in the flag carrier’s coffin.”

AI is now pinning its hopes heavily on its new 787 Dreamliners which are expected to fly soon. It has six of these in its hangars, and another seven are expected later this year. Air India is also considering a non-stop flight that will land in Melbourne and Sydney and another that will head to Rome and Milan.

But it could be flying in dangerous skies. Analysts  point out that Jet Airways did try flying to Rome but pulled out from the route. The new Dreamliners must be put on profitable routes or else they will end up adding to the airline’s financial woes. Says Jitendra Bhargava, former executive director, AI: “You are not making your other flights cost-effective. Unless you address your inherent weaknesses, what is the point of expanding.”

As for other Indian carriers, the high-flying IndiGo is barely two years old in the international aviation game. Ditto SpiceJet. They are a long way from taking on the Gulf carriers that are supported strongly by their governments. As Kapil Kaul, CEO, South Asia, Capa, says: “It’s like fighting the government of the UAE.”

Just look at how much Dubai is pumping into its aviation industry, which contributes 28 per cent to its GDP. Dubai International Airport’s 60 million-passengers-a-year capacity is being augmented to 90 million a year. A new airport at Al Maktoum is being built that can accommodate 160 million passengers a year. Doha’s new Hammad International Airport, the future home of Qatar Airways, will handle 29 million compared to 12 million in the current airport. “The Middle East does not have a core market of its own. For them, India, just two-three hours away, with a population of 1.2 billion, is a big opportunity to reach these goals,” says Kaul.

No wonder India’s private airport operators like GMR, which runs Delhi and Hyderabad airports, and GVK, which is modernising Mumbai airport at an expense of around Rs 12,000 crore, are upset. Not only have Delhi and Mumbai lost the chance to be hubs, the airport operators fear a serious loss of revenues if Indian passengers are whisked away from smaller airports like Kozhikode and Lucknow.

All the contestants in this aerial battle are fighting for a gigantic prize: the globetrotting Indian air passenger, whose numbers are climbing spectacularly. From around 15 million in FY04, the figure has zoomed to 44 million in FY13. By 2021, it’s estimated that 97 million passengers will travel abroad, making India the second biggest nation of globetrotters after China. And while domestic air travel in India was hit last year — growth dropped by 6 per cent — international travel has remained stable. Says Capa’s Kaul: “International ticket prices went up by around 30 per cent in the past year. Despite prices going up, the market has not fallen as sharply. This shows that the fundamentals are quite strong.”

And what about Europe’s once-mighty airlines which used to be the first choice of most Indian travellers? German giant Lufthansa used to be the biggest foreign carrier into the country and dominated the Indian outbound market with a 16 per cent share at its peak. Today, although it flies 54 flights a week to five destinations in India, its share is estimated to be just about 4 per cent. At another level, Lufthansa’s efforts to fly its massive A380, which can carry more than 700 passengers, to India have been stymied by the government.

The Europeans haven’t been adding flights to and from India like the Gulf airlines have been doing. In fact, they have cut down on destinations — Air France-KLM pulled out of Hyderabad and Chennai in 2009. “Operations were not viable,” says Yeshwant Pawar, general manager, South Asia at Air France-KLM.

But don’t imagine for a moment that India is any less crucial for them. Take British Airways. “India is our second-biggest market and 10 per cent of our planes are directed towards this country,” says Andrew Crawley, chief commercial officer, British Airways, describing how Indian passengers will benefit from the airline’s recent 5 million pound investment on aircraft and services.

So, with more flights landing and taking off in Indian airports, will the Indian passenger be the big winner? Unfortunately, there’s no sign of that yet. As Pawar says, “There’s a bit of a contradiction in India as even though competition has grown and flights have increased, prices have risen.”