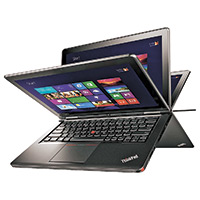 08 November, 2014
Print this article Font size -16+
Lenovo ThinkPad Yoga
Rs 112,418 & Rs 96,765
lenovo jumped right into the ultrabook and hybrid segment with its Yoga notebooks and later, tablets. But not many would have expected to see the iconic ThinkPad get the Yoga treatment.

Well, it has. Its 12.5-inch screen bends backwards all the way till it meets the back of the keyboard —and yet it's every bit the ThinkPad, built very tough and even a bit heavy. All that is signature about the ThinkPad is still there including the little red track point which ThinkPad users love. It's targeted at the enterprise and not for someone looking for a light, snazzy notebook.

The magnesium alloy casing looks no-nonsense and the hinges that allow the screen to move all the way back 360 degrees seem really sturdy. The screen is a 400nit IPS panel with FHD resolution. It's a touch screen and is responsive enough though I did encounter the occasional lag. The keyboard on ThinkPads has been as iconic as the device itself, and it's pretty good on this laptop too. The battery lasts about six hours, but I didn't think this notebook is so ultra portable as to be the type you'd use without power nearby. There are two configurations, both nice and pricey. A Rs 112,418 and Rs 96,765. Both are running Windows 8.

Sony Xperia C3
Rs 23,990
how do you put together a smartphone for today's self-obsessed generation? You do it by outfitting the device with a 5MP front camera. Or that's what Sony believes as it rides the selfie bandwagon to add the Xperia C3 to its line. I'm not sure whether one would buy a Rs 23,990 phone to shoot selfies, but one never knows. I certainly do see Facebook flooded ad nauseam with selfies from both young and old.

To be selfie capable, the C3 front camera has a 25mm wide-angle lens. That means you can take that cliche group shot with everyone fitting in, complete with their poses. You also have a soft LED flash so that you can take photos indoors without the unpleasant  blue-white glare of a flash. Of course, it's not always easy to escape. There's a red eye reduction mode which didn't do too much. Nonetheless, it's a good front camera and helped by the timer plus dedicated camera button on the side, both which can get you that arm's length shot.

The rest of the phone, including the 8MP rear camera, is average. Th specs are now offered by devices half the cost and the phone is a large 5.5 inch gadget that may be a bit awkward to hold just for selfies.

But then, it's got something else going for it: good looks, if you manage to get the mint one, and great battery life that could cross over to the next day.  The C3 is light and super thin, doesn't have a bad screen, and has a steely metallic strip accounting accenting it's good looks. It's just that it's fairly expensive for what it offers.