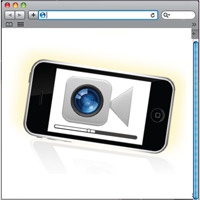 08 November, 2014
Print this article Font size -16+
We are certainly evolving on social networks — first it was the age of text status updates, and then Instagram made photo-sharing go viral. And now, powered by the smartphone surge, video updates are becoming all the rage.

Cashing in on the craze for video is Keek, a new kid on the social block (it was born in 2011) founded by a sixty- something-year-old Isaac Raichyk. The Toronto-based social video network is a mix of YouTube and Twitter. It allows users to upload 36-second video status updates that are called Keeks. And if you respond to the status, that’s called a Keekback.

Other networks are also getting aggressive on video updates — Twitter owns Vine, which allows users to embed and post video clips. But Vine, which was initially available just on iOS, is still only on two platforms, while Keek is on almost all the mobile platforms and boasts a desktop version as well. Given the growth of Keek’s user base (45 million registered users in 200 countries and adding 200,000 new users every day), video updating sites have crossed the tipping point. Techies believe that what Instagram did for photo-sharing, Keek could do for video-sharing.

BRAND BUZZ
Imitation Or Inspiration?
LinkedIn has taken a leaf out of Facebook and just introduced  sponsored updates. Brands can now promote news content that includes videos and presentations in the newsfeed of LinkedIn members. Members will have the option to ‘follow’ the sponsoring company as well as ‘like’, ‘comment’ and ‘share’ posts with their network. Meanwhile, Facebook, is adding a Twitter-like feature that allows users to share their posts on other networks and blogs. Looks like innovation begets imitation.

Dig The Data
Fair Share
Of the five crore active Indian Internet users, 22 per cent are women. Women are active on social networks throughout the day but activity levels peak at 9.00 pm. Social networking sites witness the highest usage from women between the ages of 15 and 24 years, according to online audience and ad measurement platform ViziSense