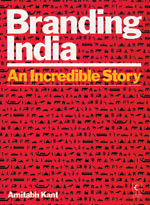 Tourism is a foe of terrorism", author Amitabh Kant quotes the former Prime Minister Atal Bihari Vajpayee. Terrorism divides while tourism unites, so what can be a nobler endeavour than to promote travel and tourism?

It is indeed challenging to promote a country as diverse as India. But the ‘Incredible India' and the ‘Atithi Devo Bhava' campaigns that Kant created has huge recall value. So much so that impressed by the ‘Incredible India' campaigns, US lawmakers are pushing for a new act aimed at projecting the US as a preferred travel destination across the world. Back to the book, Kant, who is principal secretary and special commissioner (Industries), Kerala, also created the campaign ‘God's Own Country' for Kerala, making it one of the most-sought-after destinations in the world.

In the book, Kant talks about the infrastructure requirements for growing this untapped industry, which includes hotels, modes of transport, basic infrastructure and softer aspects such as culture, safety and security. He talks about the potential growth areas such as medical and rural tourism, and new enablers such as internet and social networks. He also advocates low-volume, high-value tourism instead of low-value backpacking travel, which perhaps does not meet the overall purpose of travel.

The book has been colourfully designed using many visuals from the various Incredible India campaigns, with data depicted innovatively. Even the page numbers have been inserted in a novel way. Overall, this is a good book for those in the travel and tourism sector.