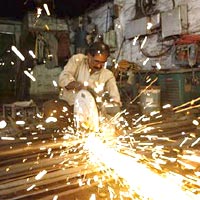 Analysts polled by Reuters had expected a rise of 4.5 per cent in October output. Revised government figures released showed September output growth was revised down to a contraction of 0.7 per cent from a contraction of 0.4 per cent. Manufacturing, which constitutes about 76 per cent of industrial production, rose by 9.6 per cent in October from a year earlier, the statistics office said. In the April-October period, industrial production expanded an annual 1.2 per cent. Separately, annual consumer price inflation accelerated to 9.90 per cent in November from the previous month, government data showed.

Brinda Jagirdar, chief economist, SBI, Mumbai
"To a large extent the uptick in industrial performance is optical, masking the reality, largely because of base effect. I don't expect this kind of buoyancy in manufacturing to sustain going forward as five industrial sectors are showing negative growth. I don't think the RBI (Reserve Bank of India) should be swayed by this number and should address the underlying weakness in the economy by cutting rates."

Rajeev Malik, senior economist, CLSA, Singapore
"It's a positive surprise but bear in mind the jump is distorted by last year's low base, and this is going to reverse in November. The Diwali holidays were in October last year but in November this year. The real, credible assessment will be possible only after the November data. Overall, there is some stabilisation in activity. But the March quarter will show signs of a more convincing recovery. The RBI should keep on hold next week but a CRR (cash reserve ratio) cut is possible. We maintain our expectation of a repo rate cut at the January meeting."

"A positive number on capital goods after seven months of consecutive contraction, is a good sign. In the months to come, we would watch for the 'crowding in' impact on the domestic investment cycle.

"Today's number also corroborates Yes Bank's Demand Conditions Index, which showed two months of consecutive improvement in September and October, after six months of consecutive correction. In terms of policy, we maintain our call of status quo in December policy. And, we expect the pecking order for the RBI policy action to be open market operations followed by a 25 bps cut in the cash reserve ratio in January and followed by a repo rate cut of 50 basis points in March."

Siddhartha Sanyal, India economist, Barclays Capital, Mumbai
"This number was not entirely unexpected because it reflects the pre-festive season production month, which was not the same last year. Obviously you don't expect such numbers to be repeated month after month. This number is not a gamechanger. But generally the trend in second half (October-March) will be slightly better than in the first half, though the overall growth momentum is still slow."

Rupa Rege Nitsure, chief economist, Bank of Baroda, Mumbai
"This was expected on account of two things. One was, the base effect and the core industrial output, primarily coal, and refined petro products had shown good buoyancy in the month of October. But the number does not give confidence that growth momentum at this pace will be sustained, as capex concerns have not eased significantly. The RBI will attach more weight to the headline inflation number and the core inflation component rather than getting influenced by today's IIP reading."

A. Prasanna, Economist, ICICI Securities Primary Dealership Ltd, Mumbai
"We should be careful in not over-interpreting this number. With some shifting of festivals in October and more number of working days, we should see some payback in November. Already, we saw the auto sale numbers, which were not encouraging, and maybe that will reflect in the overall industrial production numbers for November.

"That said, there are enough signs of optimism. A lot of supply side issues that were there last year, seem to have gone away. In a sense, the IIP number that we saw in September showed a bottoming out, and we may see expansion month after month from here. If this kind of number sustains, then the situation on growth may not be alarming, in the sense there is going to be some recovery."

Sujan Hajra, chief economist, Anand Rathi Securities, Mumbai
"We were expecting a seasonal recovery in the second half. Manufacturing and core sector growth have bottomed out but the slowdown in services continues. I stick to the fiscal year IIP growth target of 4.6 per cent. However, with inflation likely at 7.8 per cent in November, a rate cut is ruled out in December. I do not expect any CRR cut also as the government is maintaining large cash balances with the RBI."

Amol Agrawal, economist, STCI Primary Dealership, Mumbai
"The core sector numbers had indicated an upsurge in the index. But it has come in higher than expectations. The numbers are however on a lower base. The RBI is unlikely to cut rates on December 18. However, with the repo bids coming down, a CRR cut is not definite."

G. Chokkalingam, executive director and chief investment officer, Centrum Wealth Management, Mumbai
"One number should not be taken seriously; off late the monthly fluctuations are very high. Base effect is also there. This is not an indicator of turnaround. Equities should be neutral to this as on one hand it spoils hopes for rate cut but smart people understand that it's just a base effect."