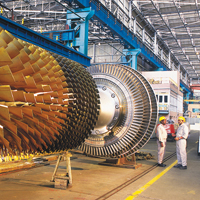 08 November, 2014
Print this article Font size -16+
India's industrial production index rose at its fastest annual pace in nearly a year in October, after unexpectedly contracting in September, aided by a statistical spurt in infrastructure-related output, a Reuters poll found.

The index of industrial production (IIP) probably grew 4.5 per cent annually in October, after contracting by 0.4 per cent in September, according to a survey of 25 economists.

While such a positive number could bring much-needed relief to a battered economy, economists warn it would not imply a sustainable turnaround ahead.

Many analysts are attributing positive factory output growth in October to a weak statistical base from a year ago when it shrank 5 per cent, rather than an improvement in actual production.

"To be completely frank, it is not that industry has recovered in a big way," said Vishnu Varathan, economist at Mizuho Corporate Bank.

"Its a very, very light incremental boost despite how the headline numbers look ... because base effects account for the lion's share there."

Industrial output has averaged a meagre 0.4 percent so far in 2012 and even the expected 4.5 percent growth for October would be a far cry from the double-digit rates witnessed before the onset of the global financial crisis in 2008.

"We are not looking at growth of more than 2 percent in the industrial sector for the entire year," said Madan Sabnavis, an economist at CARE Ratings.

"Growth has bottomed out, there will only be a gradual improvement."

A 6.5 percent year-on-year growth in India's October infrastructure output or core sector output, which accounts for about 40 percent of total industrial output, will buoy the overall number.

Weak demand from the country's top export destinations, the United States and Europe, resulted in a 1.6 percent drop in India's October exports.

Such a performance would be far behind that of Asian rival China where factory output growth for the same month rose at a faster-than-expected 9.6 percent annually.

Last week, data showed that annual economic growth continued to languish at a near three-year low of 5.3 percent in the quarter to September, keeping the economy on track to record its worst year in a decade.