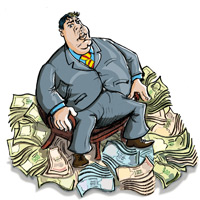 08 November, 2014
Print this article Font size -16+
The Jindal Steel & Power’s chairman and managing director Naveen Jindal’s eye-popping salary has yet again kicked off a raging debate on what should be the right salary for a CEO.
Jindal paid himself Rs 73.42 crore in 2011-12, the highest any CEO of a listed company got in the fiscal year, prompting Stakeholders Empowerment Services (SES) — an advisory firm —to urge the company’s shareholders and institutional investors to oppose the move. With Jindal owning 59 per cent of the company, that did not quite happen. But do not expect this debate to die down soon.
Legally, Jindal can get away with this since his compensation is a little over 2 per cent of the company’s net profit, which is well within the limit of 5 per cent of net profit. But the widening gap between the average worker’s salary and the CEO’s salary is a concern on which even the Prime Minister of this ‘socialist republic’ has advised the industry to exercise moderation.
The West, particularly the US, flew into a rage when the ratio of the average CEO compensation and the average production worker’s compensation in 2001-02 hit a peak of 300:1. It climbed down to about 150:1 the following year. But by the time the realty and the banking bust occurred in 2007-08, the CEO’s compensation was around 275 times that of the average worker.
Our CEOs are so used to idolising the US that the widening gap is being constantly ignored. But it may be worth pointing out here that less than 40 years ago — which would still put the size of the US economy of 1966 ahead of the current Indian economy — this ratio was as low as 25:1.
In contrast, Naveen Jindal’s compensation (assuming the average compensation of a Jindal Steel production worker to be at a very magnanimous Rs 30,000 per month, which it is not) is already 2,038 times. Perhaps, that is what explains the outrage. But Jindal is not the only one stretching the limits. Each one of India’s highest-paid CEOs, including the second-highest Kalanithi Maran and his wife Kavery, need to hold a mirror to themselves on the sensitive issue of the widening gap
between themselves and their employees.