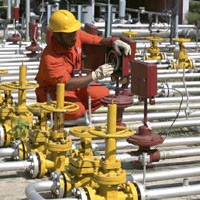 The state-run company reported a net profit of Rs 3,389 crore for its fourth quarter ended March, down from Rs 5,644 crore a year earlier.

Analysts on average, had expected the company to post a net profit of Rs 4,708 crore for the quarter, according to Thomson Reuters Starmine data. Net sales rose 14 per cent to Rs 21,389 crore.

Shares of ONGC, India's second-biggest company by market value, closed 0.3 per cent higher ahead of the results. The stock has risen nearly a quarter so far in 2013, outpacing a 5 per cent rise in the sectoral index.