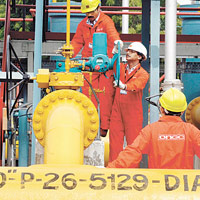 08 November, 2014
Print this article Font size -16+
India's state-owned oil company ONGC is interested in exploring for oil and gas in the Arctic offshore with Russian partners, leaders of the two countries said after holding talks in Moscow on Monday, 21 October.
The two sides will study the possibility of pumping Russian hydrocarbons by pipeline to India, while agreeing on the significance of supplying Russian liquefied natural gas (LNG) to India.
A joint statement, issued after President Vladimir Putin hosted Prime Minister Manmohan Singh in the Kremlin, contained no energy breakthroughs. India has long sought to expand its upstream foothold in Russia, with little success.
ONGC's overseas arm is a partner in the Sakhalin-1 oil and gas project, which is operated by a unit of Exxon Mobil State oil major Rosneft, another Sakhalin-1 partner, is lobbying for the right to export LNG to Asia-Pacific buyers.
Rosneft and Exxon have announced plans to build a $15 billion LNG plant to process Sakhalin-1 gas, to be launched in 2018 with an initial capacity of 5 million tonnes per year.
Russia estimates its offshore oil resources at 100 billion tonnes, which would be enough to satisfy global demand for 25 years at current levels of consumption.
Rosneft already has agreements with ExxonMobil, Eni and Statoil to explore for Arctic deposits. These projects are unlikely to produce any oil or gas before the 2020s.