Now In Plus Size 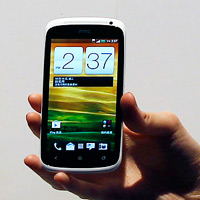 08 November, 2014
Print this article Font size -16+
When the HTC One came out into the world earlier this year, everyone loved it. It was a departure from other Android slabs that looked so much the same, and it was beautifully designed, with full attention to detail. It was big, looked classy, had a lovely screen, an excellent camera, and rode into town on a quad core processor. It became a serious contender to the Galaxy S3 and the iPhone 4s.
So, HTC figured it wouldn’t let go of a good thing and decided to give the One X+ some more power. Wisely, they decided not to tamper with its looks. It has the same design, unibody build and more memorably, the textured matt finish back in egg-shell white and in black. Contrasting with that is the jet black of the large 4.7 inch 1,280-by-720 pixel Super LCD 2 screen. But now there’s a more powerful processor to run it: 1.7GHz quad core Tegra 3. The One X+ has a whole lot of storage space – 64GB of it.
HTC says this phone is 27 per cent faster than its predecessor and has 37 per cent more battery life with its 2100 mAh battery.
The One X+ is on Jelly Bean, which in itself speeds things up and adds features to the device, including of course Google Now. HTCs own interface software is in its version 4+ (that’s a lot of +’s) and brings features like enhancements to the camera and a tap to pair feature to connect to Beats speakers.
At Rs 40,190, the One X+ is rather + on the price. Watch for a reduction sometime.
mala(at)pobox(dot)com, (at)malabhargava on Twitter
Tags assigned to this article:
mala bhargava exclusive to web more 4 gadgets smartphone htc caught my eye web exclusive htc one galaxy s3 gadget reviews htc one x plus iphone4