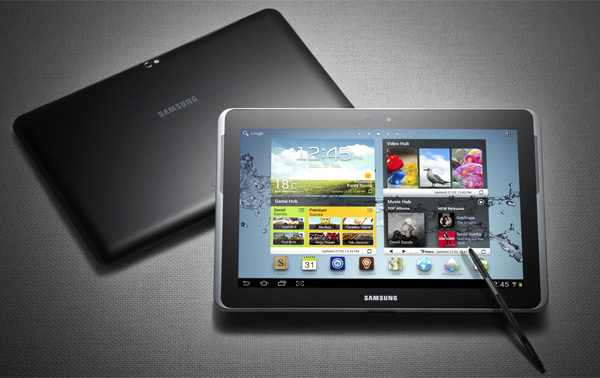 08 November, 2014
Print this article Font size -16+
It may seem strange, but the iPad and the Samsung Galaxy Note have one peculiar thing in common — both were received with mixed responses worldwide, with most folks balking at the difficult-to-slot category-creating hardware. Both ended up doing swimmingly well, as you probably know. Does the Note's spiritual successor, the Android 4.0-based Note 800 10.1-inch tablet, make a note-able impression? Read on…

Visually, the Note 800 has a lot in common with a previous 10.1-inch tablet from Samsung, the Tab 750, and the unchanged plasticky exterior makes an expensive tablet feel cheap and flimsy. Much like the Tab 750, it suffers when you compare the exteriors to the Nexus 7 and the iPad. But that's about where the similarities to the 750 end. Not only do the internals get a major boost by way of a 1.4GHz quad core processor, 2GB of RAM and a HD-capable 1280 x 800 pixels display. If you're a specs maven, you'd notice that the display doesn't even come close to the iPad's 2048 x 1536-pixel display.

But by virtue of this being a Note, the S Pen stylus and Samsung's suite of stylus-compatible apps take center stage and continues to deliver on a trick the iPad still doesn't have. The stylus uses Wacom's conductive stylus technology and is pressure-sensitive. It's comfortable to hold and easy to master, and has some neat tricks up its sleeve. For instance, if you hold the S Pen just above the display, you'll see a small cursor floating around the screen, just like you're moving a mouse, and a raised button near the tip brings up contextual menus, just like the right-click of a mouse. What really helps is that the screen can actually tell the difference between the S Pen and your palm, so you can rest your hand on the screen while writing, just like you would do so when writing on a pad. Or you could flip the pen around to erase. Bear in mind, it only works with certain apps, but Samsung's done well in making it compatible with big apps like Polaris Office, Photoshop Touch and their own real-time-handwriting-recognition-enabled S Note note-taking app. Keep in mind that while the standard web browser has some built in stylus interactions, you're probably going to install a better browser, such as Opera Mobile or Chrome, so these functions will go unused.

Now, having used professional grade drawing tablets a while back, I figured one might as well pit the Note 800 against them, since the creative types are a major audience for this device. I let some friends in the business try out the Note 800, and the feedback was generally that while the Note 800 was nice for list making and quick drawings, it was nowhere near as accurate as Wacom or Intuos tablets that are the staple for graphics designers and illustrators. That's also why they cost a fair bit more than the Note too! The same goes for Photoshop Touch — while it is great for quick edits, it isn't a viable replacement for Photoshop on a PC with a mouse or a drawing tablet.

There's another Note feature which I quite liked on the 800 - Multiscreen. With a limited set of apps — Polaris Office, Internet, S Note, Video Player, Gallery and Email — you can actually have two of them running simultaneously, side by side on the screen. Want to take notes while you browse the Internet? Or watch a video while typing an email. Yes, you can! No third-party app support for now, though.

In the end, the Note 800 does a few things that the iPad cant, and does them fairly well, but winning the skirmishes doesn't win it the war. For some, the S Pen and touch apps may be reason to buy this tablet, but taken alone, it isn't a compelling tablet to recommend over the iPad or the Nexus 7.