Not Too Late To Ride The Bull 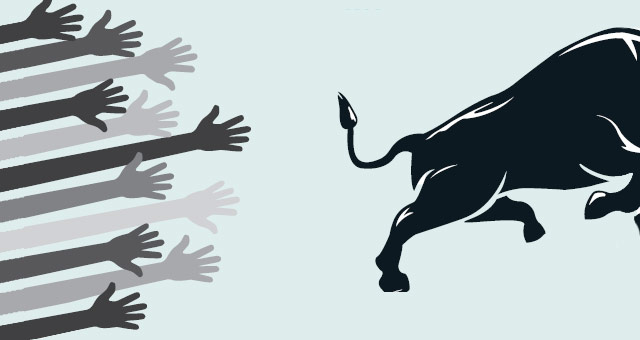 08 November, 2014
Print this article Font size -16+
Only if you lose money in a bull run, will you learn. That is how Chennai-based ace investor Anil Kumar Goel learnt his lesson. After losing twice in two separate bull runs.

Goel made his first stock market investment — a sum of Rs 50 lakh — in the final stages of the bull run in September 1992. Six months down, the value of his investments had dropped to Rs 33 lakh.

He decided to try his hand in the next bull market rally, which started in mid-1993. This time around, Goel managed to time the rally right, but erred in stock selection. He couldn’t resist the temptation to buy cheap stocks that were getting pounded on the bourse. A few months into the purchase, he realised his mistake. The cheap stocks he had bought had burnt a hole in his portfolio. One wrong decision had wiped out most of his capital.

“I had to sell some six acres of land along Chennai’s East Coast Road to come out of the mess,” reminisces 62-year-old Goel.

The losses were heavy, but Goel learnt two important lessons that helped him in subsequent bull runs. One, never try to time the market, and two, never invest in companies just because they are cheap.

“I never made any mistake with bull runs after that. Even this time, I got my call fairly right,” says Goel. In an interview to BW | Businessworld last year, Goel had predicted that the bull phase would start in 2015 and peak out in 2016. “The market throws up one euphoric bull run every eight years. What you are seeing now is one such phase,” he says.

“The initial part of the rally was on account of money moving into a cheaper asset class. The second part was the confirmation rally. We entered the bullish phase in the third leg of the rally, after the elections. People who managed to catch all the three phases have already made three-four times the money they invested,” says Goel.

While the 30-share BSE Sensex has gained 28 per cent since the beginning of the year, some broad-based indices like the BSE 500, the BSE mid-cap index and the BSE small-cap index have appreciated 32 per cent, 46 per cent and 65 per cent, respectively, over the past nine months.

Does that mean retail investors have missed the bus? “No, there’s more money to be made,” says Harsha Upadhyaya, chief investment officer (equity), Kotak Mutual Fund.

“Investors may have missed the initial part of the rally, but if this is a multi-year bull run, there is more money to be made over the next three to four years.  We may not see big gains in the short term unless there is further re-rating. However, one can expect good returns over the next few years. Even without re-rating, the market may provide returns in line with expected corporate earnings growth of about 18 per cent compounded annually over the next three years,” adds Upadhyaya.

“This rally is different from the other bull runs you have seen. It is happening against the backdrop of a stable government at the centre. We’ve not had a government in absolute power in the last 30 years. If the government acts on even 50 per cent of its promises, it will reflect positively on the stock markets,” says Siddharth Sedani, vice-president, Portfolio Management Services, Microsec Capital.

Once Bitten, Twice Shy
Retail investors have not been very quick to react to the bull run. The reason could be their continued aversion to stock markets — especially after the drubbing they were subjected to after the last bull run.

“Retail investors had turned their backs on Indian equities five years ago. They are coming back in small numbers to test the market. While the market momentum and Modi mood is behind the swing, the entry of retail investors could be the next big thing,” reads a recent Citi note.

According to brokers, Indian households have sold $8 billion worth of equities over the past five years. A good chunk of the retail sell-off happened during the short rally immediately after the general elections in 2009. Right through 2010 upto 2013, retail investors utilised market momentum to exit from trapped stock counters. Investor aversion to equities has brought household equity exposure to an all-time low of 2 per cent.

Retail investor participation is very critical for better price discovery in stock markets. Higher retail participation will result in trades across market capitalisation. The presence of retail investors also reduces stock market volatility. That said, equities as an asset class are for investors with a healthy risk appetite. Investors should do their research before investing.

“Investors should start investing in stocks now. If they invest now, they will still get 10-12 per cent upside from current levels,” says Saurabh Mukherjea, CEO, Institutional Equities, Ambit Capital.

“The idea is to just pick clean, good companies with strong cash flows. You will make money irrespective of what the index levels are,” adds Mukherjea.

Broad-based Rally
Around 360 companies in the BSE 500 cluster have returned in excess of 35 per cent over the past year. Companies such as Gati, TVS Motors, Ceat, JK Lakshmi Cement, BF Utilities, Aurobindo Pharma, BEML, Finolex Cables and Monsanto India have appreciated three to six times over the past year.

“In a bull run, even low-quality stocks move up in the initial part of the rally. But that only happens in the first few months of the rally. From now on, you will see more of quality stocks gaining on the bourses,” says Ambareesh Baliga of Edelweiss Financial Services.
break-page-break
Retail investors will be better off investing in companies with stable corporate earnings. “We expect corporate earnings to grow about 20 per cent over the next four years. Stocks always trace corporate earnings. So, even if you conservatively manage to make 18-20 per cent on a stock, you would have doubled your investments in the company in four to five years,” say Jyotivardhan Jaipuria, head of research, Bank of America Merrill Lynch.

According to a recent Prabhudas Lilladher report, the free float earnings per share (EPS) for Nifty companies in FY15 and FY16 are estimated to be Rs 462.3 and Rs 544.9, respectively, representing a year-on-year growth of 17.1 per cent and 17.9 per cent, respectively. Automobiles and metal companies are expected to lead earnings growth in FY15 and FY16, the Prabhudas Lilladher report said.

What’s In A Number?
Around 300 companies in the BSE 500 cluster command a price-to-earnings (PE) ratio in excess of 15.5.  In terms of overall market valuations, the Nifty at 8086 is trading at 17.5 times the estimated FY15 free-float earnings and 14.8 times the estimated FY16 earnings. The 10-year average for the Nifty’s one-year forward PE is at 14.9x, implying that it is trading at a slight premium to its last 10-years’ average of one-year forward multiple.

“At 16-17 times PE, the market is not in a very expensive zone. There is corporate earnings visibility to support high valuations. Investors should not make the mistake of not investing in the market by merely looking at the PE ratio,” says Sampath Reddy, chief investment officer, Bajaj Allianz Life Insurance.

Over 230 BSE 500 companies have scripted all-time highs in rallies since January this year. Ashok Leyland, Axis Bank, Bharat Forge, Britannia Industries, Hindustan Unilever and Nestlé India are among companies that have notched up new price highs in September.

“Investors should realise that this is a confirmed bull run. They should be conscious about the price they pay, but they should not let a good investment opportunity go,” says Alex Mathews, head, Research, Geojit BNP Paribas Financial Services.

In most cases, the upward revision in stocks is solely on expectations that the government will bring about policy-level changes in key sectors. Gas price revision and deregulation of fuel prices are expected to revive the fortunes of oil and gas companies.

Higher spending on defence is also likely to have a positive effect on companies engaged in the production of non-ferrous metals. Rupee tailwinds and improvement in the US economy will help IT and pharma companies.

The only vertical that is a dampener on market sentiment is PSU banks, which may continue to face downward pressure — both in terms of earnings and stock appreciation.

According to Mathews, investors should look for investment opportunities in auto, tyre manufacturing, cement, pharma, IT and capital goods companies.

The Mutual Fund Route
Investors who do not have the time or skill to make informed and well-researched investments should never opt for direct equities. They should only take exposure to equities through the mutual fund route. Mutual funds, on their part, have done extremely well with top equity funds yielding 60- 70 per cent returns over the past year.

In fact, retail investors have already started investing through mutual funds. This is evident from the massive inflows into equity funds over the past few months. Asset management companies booked record gross sales of over Rs 9,800 crore in equity funds in August. The industry has added close to 2.22 lakh folios in equity funds since May 2014.

The Bottomline
Going forward, investors should not expect too many spectacular rallies. They will have to ride smaller waves to make money from the market. Deep corrections are always round the corner in bull markets — be ready for one. Invest with a lot of conviction; if you think a stock will do well in future, back it up. Set a price target for each stock; exit when you cross the price. Set stop-losses if you want to restrict portfolio damage. Happy investing! This is, after all, the mother of all bull runs.