Not By The Book 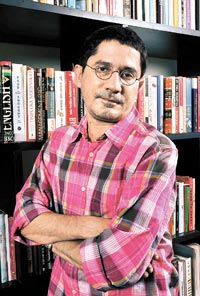 As far as possible, I stay away from paperbacks (it is another matter that my own book never had a hardcover edition. I suppose that is life's way of slapping me back). I invariably read a book with a small plastic ruler and a pencil. I underline parts and sometimes jot notes to myself in certain sections. These serve as a great reference point for me. I know exactly what was important for me in that book.

I buy a book every day. I buy most of my books online. From Amazon, and now Flipkart. Aside from that, I buy books from just three bookstores in the country. To me, the best pure-play bookstore in the world is Fact & Fiction in Priya Cinema Complex at Delhi's Vasant Vihar. Closer to where I live, Quill And Canvas is first rate. They send me cartons of books that I might like. I pick what I do and they take back the rest. The other uber cool store is CMYK in south Delhi. Though calling it a vanilla bookstore is so pedestrian.

I like my bookcases disorganised. So it is perfectly possible to find a book on cocaine lying next to one on climate change. The distressed look of a bookcase is hugely seductive to me. Though over the past few weeks, I have been toying with the idea of getting them catalogued, but I feel bad for the bloke who has to do it. Going through 5,000 books can be no fun. And then making an excel sheet. Eeks!

I exfoliate our collection once every two years. I give those books to a dear friend of mine, who never reads them.

I detest coffee table books. I never read in the bed. I think a book is such a silly thing to go to sleep with. Having said that, I read everywhere. I read in airport queues, in doctor's chambers, in my car... Never while on the throne. I never look at bestseller lists. I only read recommendations from TED. Or brainpickings.org. Aside from that, I go by my own instinct. And if I do need a recco, I call up Kosti.

Finally, even though I am tech-savvy, I cannot bring myself to read an e-book. I have all kinds of e-book reading devices, but in my estimation, nothing can replace type on paper. That sort of sums up my take on books. But to each his own. Enjoy the one you are reading.