Nokia Axes Dividend To Save Cash For Lumia Push 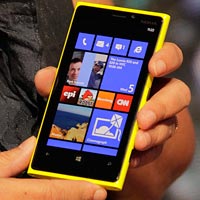 08 November, 2014
Print this article Font size -16+
Finnish mobile phone maker Nokia plans to axe its annual dividend payment for the first time in the company's recorded history to shore up its cash position against falling sales and buy time for a turnaround.

While cost cuts and asset sales have given the struggling company breathing space to keep marketing what many call its make-or-break Lumia smartphones, analysts said it was far from a recovery and was still falling behind Samsung and Apple in the smartphone race.

Nokia has slashed one in three jobs and has sold off assets including its company headquarters under Chief Executive Stephen Elop, who was hired from Microsoft in 2010 and promptly tied the company's fortunes to the untried Windows Phone operating system made by his former employer.

"We believe we removed the cloud of liquidity concerns," Elop told reporters on a conference call.

Nokia, which earlier this month announced it had returned to underlying profitability for the first time in a year, said the suspension of the dividend, which cost 750 million euros ($996 million) last year, would give it "strategic flexibility".

Nokia said it had paid a dividend every year since 1989, but didn't have records for earlier periods in its history, which goes back over 100 years.

The company ended the year with net cash of 4.4 billion euros, down 22 per cent on a year earlier, but up on the previous quarter and above the market estimate of 3.4 billion, mostly due to a turnaround at Nokia Siemens Networks, its telecom equipment venture with Siemens.

It has also been making better use of its rich portfolio of technology patents, earning royalty payments from other technology companies. It also received $250 million from Microsoft in the quarter in return for using Windows Phone.

Some analysts have said Nokia could soon take NSN public, which would secure even more cash to keep the company running. Elop said all options were on the table for NSN's future.

Lost In Transition?
Elop is under intense pressure to show he made the right decision in February 2011 to drop Nokia's own operating system in favour of Windows Phone. He has said it would take two years for a successful transition, and that period is almost over.

"They have had two transition years now, and this year will be yet another one. The ramp-up continues. It has been way too slow," said analyst Mikael Rautanen from equity research firm Inderes.

Some investors have said Elop will need to change strategy or even leave if Nokia is unable to turn the company around. Some of the more optimistic investors cite Nokia's history of reinventing itself. It faced bankruptcy in the 1990s before it shifted to cellphones from toilet paper and rubber boots.

Nokia sold 4.4 million Lumia devices in the fourth quarter, including the new Lumia 820 and 920, which were launched in November and use the latest Windows Phone 8 software. Analysts estimate Nokia's market share in the high-margin smartphone business is only around 5 percent.

Many said quarterly sales of Lumia phones need to rise to around 10 million, with gross margins of around 20 percent, to convince investors that its smartphone strategy is working.

Supply constraints have weighed on Lumia sales, but Elop said the company was "making progress" in resolving them. He declined to specify what parts or suppliers were causing problems, but sources have cited chip shortages.

Non-smartphones still make the bulk of Nokia's revenue, but margins are thin, and analysts believe Nokia needs a successful smartphone offering if it is to survive. Its fourth-quarter sales volumes of other mobiles fell 15 percent to 80 million units, with the average selling price down 3 percent.

While Nokia's feature phone Asha has proven more popular than initially expected, analysts say that even consumers in emerging markets will eventually shift to smartphones so they can access the Internet to upload photos and go on social networking sites such as Facebook.

Some said the Lumia's recent launch in China and India could help restart growth, though it faces stiff competition from Samsung there.

Telecoms executives in Europe and the United States have said they want Nokia to succeed, to keep Samsung and Apple's power in check, but analysts have said there were few signs the two were losing their lead.

While Apple's results overnight fell short of expectations, it still shipped a record 47.8 million iPhones in the December quarter.

"It doesn't look like Apple would start losing their volume strength in any remarkable way," said Pohjola analyst Hannu Rauhala.

Nokia shares were down 8.3 per cent at 3.20 euros at 1445 GMT. They had risen 70 per cent over the past three months, but were also the most shorted among the euro zone's blue chips ahead of the results.