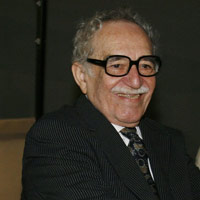 08 November, 2014
Print this article Font size -16+
Gabriel Garcia Marquez, the Colombian author whose beguiling stories of love and longing brought Latin America to life for millions of readers and put magical realism on the literary map, died on Thursday (17 April). He was 87.

A prolific writer who started out as a newspaper reporter, Garcia Marquez's masterpiece was "One Hundred Years of Solitude," a dream-like, dynastic epic that helped him win the Nobel Prize for Literature in 1982.

Garcia Marquez died at his home in Mexico City, where he had returned from hospital last week after a bout of pneumonia.

Known affectionately to friends and fans as "Gabo," Garcia Marquez was Latin America's best-known and most beloved author and his books have sold in the tens of millions.

Although he produced stories, essays and several short novels such as "Leaf Storm" and "No One Writes to the Colonel" early in his career, he struggled for years to find his voice as a novelist.

He then found it in dramatic fashion with "One Hundred Years of Solitude," an instant success on publication in 1967. Mexican author Carlos Fuentes dubbed it "Latin America's Don Quixote" and Chilean poet Pablo Neruda also compared it to Miguel de Cervantes' 17th century tour de force.

Garcia Marquez's novel tells the story of seven generations of the Buendia family in the fictional village of Macondo, based on the languid town of Aracataca close to Colombia's Caribbean coast where he was born on March 6, 1927, and raised by his maternal grandparents.

In it, Garcia Marquez combines miraculous and supernatural events with the details of everyday life and the political realities of Latin America. The characters are visited by ghosts, a plague of insomnia envelops Macondo, swarms of yellow butterflies mark the arrival of a woman's lover, a child is born with a pig's tail and a priest levitates above the ground.

At times comical and bawdy, and at others tragic, it sold over 30 million copies, was published in dozens of languages and helped fuel a boom in Latin American fiction.

A stocky man with a quick smile, thick mustache and curly hair, Garcia Marquez said he found inspiration for the novel by drawing on childhood memories of his grandmother's stories - laced with folklore and superstition but delivered with the straightest of faces.

"She told things that sounded supernatural and fantastic, but she told them with complete naturalness," he said in a 1981 interview. "I discovered that what I had to do was believe in them myself, and write them with the same expression with which my grandmother told them: with a brick face."

Although "One Hundred Years of Solitude" was his most popular creation, other classics from Garcia Marquez included "Autumn of the Patriarch", "Love in the Time of Cholera" and "Chronicle of a Death Foretold".

Tributes poured in following his death.

"The world has lost one of its greatest visionary writers - and one of my favorites from the time I was young," said US President Barack Obama.

"Your life, dear Gabo, will be remembered by all of us as a unique and singular gift, and as the most original story of all," Colombian pop star Shakira wrote on her website alongside a photograph of her hugging Garcia Marquez.

In Aracataca, a lone trumpet played on Thursday night as residents held a candlelight vigil for the man who made the town famous.

Magic And Reality
Garcia Marquez was one of the prime exponents of magical realism, a genre he described as embodying "myth, magic and other extraordinary phenomena."

His most prolific years coincided with a turbulent period in much of Latin America, where right-wing dictators and Marxist revolutionaries fought for power.

Chaos was often the norm, political violence ripped some countries to shreds and life verged on the surreal. Magical realism struck a chord.

"In his novels and short stories we are led into this peculiar place where the miraculous and the real converge. The extravagant flight of his own fantasy combines with traditional folk tales and facts, literary allusions and tangible - at times obtrusively graphic - descriptions approaching the matter-of-factness of reportage," the Swedish Academy said when it awarded Garcia Marquez the Nobel Prize in 1982.

US author William Faulkner inspired Garcia Marquez to create "the atmosphere, the decadence, the heat" of Macondo, named after a banana plantation on the outskirts of Aracataca.

"This word had attracted my attention ever since the first trips I had made with my grandfather, but I discovered only as an adult that I liked its poetic resonance," he wrote in his memoirs, "Living to Tell the Tale."

Fans will pay their last respects to him in the Palace of Fine Arts in Mexico City on Monday and he will be cremated in a private ceremony.

Politics, literary feud
Like many of his Latin American literary contemporaries, Garcia Marquez became increasingly involved in politics and flirted with communism.

He spent time in post-revolution Cuba and developed a close friendship with communist leader Fidel Castro, to whom he sent drafts of his books.

"A man of cosmic talent with the generosity of a child, a man for tomorrow," Castro once wrote of his friend. "His literature is authentic proof of his sensibility and the fact that he will never give up his origins, his Latin American inspiration and loyalty to the truth."

The United States banned Garcia Marquez from visiting for years after he set up the New York branch of communist Cuba's official news agency and was accused of funding leftist guerrillas at home.

He once condemned the US war on drugs as "nothing more than an instrument of intervention in Latin America" but he became friends with former US President Bill Clinton.

"He captured the pain and joy of our common humanity in settings both real and magical. I was honored to be his friend and to know his great heart and brilliant mind for more than 20 years," Clinton said on Thursday.

Despite his reputation as a left-leaning intellectual, critics say Garcia Marquez didn't do as much as he could have done to help negotiate an end to Colombia's long conflict, which has killed tens of thousands of people.

Instead, he left his homeland and went to live in Mexico. The damning criticism he leveled at his homeland still rings heavily in the ears of some Colombians.

He was also a protagonist in one of literature's most talked-about feuds with fellow Nobel laureate Mario Vargas Llosa of Peru.

The writers, who were once friends, stopped speaking to each other after a day in 1976 when Vargas Llosa gave Garcia Marquez a black eye in a dispute - depending on who one believes - over politics or Vargas Llosa's wife.

But Vargas Llosa paid tribute to Garcia Marquez on Thursday, calling him a "great writer" whose novels would live on.

Politics and literary spats aside, Garcia Marquez's writing pace slowed down in the late 1990s.

A heavy smoker for most of his life, he was diagnosed with lymphatic cancer in 1999, although the disease went into remission after chemotherapy treatment.

None of his latest works achieved the success of his earlier novels.

One of those, "Love in the Time of Cholera," told the story of a 50-year love affair inspired by his parents' courtship.

It was made into a movie starring Spanish actor Javier Bardem in 2007, but many critics were disappointed and said capturing the sensuous romance of Garcia Marquez's novel had proved too tough a challenge.

Garcia Marquez's most recent work of fiction, "Memories of My Melancholy Whores," got mixed reviews when it was released in 2004. The short novel is about a 90-year-old man's obsession with a 14-year-old virgin, a theme some readers found disturbing.

Garcia Marquez is survived by Mercedes Barcha, his wife of more than 55 years, and by two sons, Rodrigo and Gonzalo.

When he was working, Garcia Marquez would wake up before dawn every day, read a book, skim through the newspapers and then write for four hours. His wife would put a yellow rose on his desk.

His last public appearance was on his 87th birthday in March when he came out from his Mexico City home to smile and wave at well-wishers, a yellow rose in the lapel of his gray suit.