No Divine Caprice This 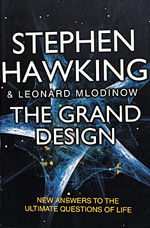 Fifth in the series of Hawkins' books, this one co-authored with Caltech University physicist Leonard Mlodinow (also his  co-author for A Briefer History of Time), is firmly rooted in scientific determinism - the premise that there must be a complete set of laws that specify how the universe has developed and shall develop. This interesting 'ism' began with Isaac Newton's idea of gravity, was extended by Albert Einstein's theory of relativity and is now being advocated by Hawkins and his peers.  The basic questions to which most physicists have historically sought answers are: what is the origin of the laws that govern this universe; are there any exceptions to these laws as in miracles; and is there only one set of possible laws? These are followed by the more incisive whys.

In trying to find answers, the book bubbles with characteristic wit at times - your view of the goldfish in a bowl and its view of you are both real and yet so different. It switches back to the textbook mode most other times -Newton, Faraday, Maxwell, quarks, anti-quarks, mesons, quantum theory and Buckyballs. For theoretical physicists with a keen interest in the basic tenets, most parts will be of great interest. For lay readers, the conversational style and intense application of logic are big take homes.  And before you make up your mind about the seemingly weighty scientific tome written by a cosmologist and a physicist, consider this: the author duo has widely researched creation myths from across the world - Viking and Chinese mythology, central African and central American folklore, ancient Greek philosophy, the Old Testament - and woven all this into the narrative with a happy dose of planetary science history, realism and scientific determinism.

That the earth revolves around the sun, that we have just one blazing sun and not tens, that we have elliptical orbits to make our summer and winter holidays so much fun and that our distance from the sun is just perfect to brew and nurture life on earth - is a lot of luck put together. Hawkins doesn't find this funny!  Just the perfect ambience for life - is that a coincidence or a grand design setting two and two together. One is left wondering whether more such extremely 'lucky' coincidences could have churned out habitable planets elsewhere in the vast expanse of the universe.

As for the futuristic M-theory - the one that Hawkins predicts will be the all-explaining Holy Grail of the universe - we will wait and watch. It is no theory really but a whole family of theories with a single unifying thread to explain each. It will be a matter of great fortune if we live to see M-theory being confirmed by scientific observation for, humankind will then have found convincing answers to questions it began asking more than 3,000 years ago.