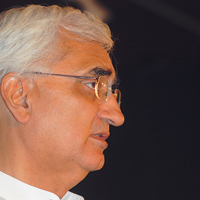 Salman Khurshid's admonition to the private sector to reduce "vulgar" executive salaries give businessmen a frisson of fearful excitement. Some wondered whether the high command of the ruling party had asked Khurshid to float a balloon or test the waters. They recalled the speech of the Prime Minister to the CII in 2007, when he asked business to "resist excessive remuneration to promoters and senior executives and discourage conspicuous consumption", and wondered whether he was using a subaltern to return to the attack. Others recalled the Congress's sanctimonious follies in its heyday of power. It paid the price for them. It was riven by internal dissensions, cut down to size by opposition, and spent years in the wilderness. But its decline was also accompanied by considerable instability. The country paid a heavy price for the party's follies; it surely does not want to go through all that all over again. After giving it very tentative approval in the 2004 elections, the electorate gave a second and more resounding vote of confidence to the Congress in the May elections; no one who voted for it thought that he was voting for pseudo-socialism. It was just as well that the Prime Minister put an end to the agitated speculation by declaring that the government had no intention of controlling executive salaries.

If the private sector was unsettled by Khurshid's campaign against vulgarity, he was even more upset by the upset he had caused. The explanation he issued is important. To begin with, the word ‘vulgar' he conjoined to executive salaries was not his, but his journalist interrogator's. The folly, so explained, becomes forgivable. More importantly, Khurshid pleaded for a thought to be given to a politician's life. People think that all politicians do is to rush about in their airconditioned cars, accompanied by platoons of guards, from one party to another in the sprawling Lutyens bungalows in Delhi. There is another side to the politicians' lives. Their constituents regard them as sources of unlimited bounty, and ring them up at any time of the day or night, importune them for everything from a job to a petrol pump, and if the politicians do not deliver, the people throw them out. Then they have to start all over again, build up their wealth, crore by crore, until they have enough to bribe their constituents for an electoral win. It is a hard life. We only see the rewards, but for every successful politician there are a hundred failures, and political failure is a hundred times more miserable than political success is enjoyable. Politics is a gamble, and politicians must be judged as gamblers, not as latter-day Gandhis.

Many will be moved by Khushid's description. Some will be moved enough to want to help him. A few of them will be businessmen. So maybe his next election campaign will be better funded. But he asks them to do something quite different — he asks them to reduce their own pay. Just how will it serve? How will it help the poor, on whose behalf Congress politicians shed endless tears? How will it make growth inclusive, forgetting that the Congress carefully selects those whom it wants to include in growth? It will do nothing of the sort; it will only reinforce the hypocrisy that has been the hallmark of the Congress.

That, however, is not a reason to dismiss Khurshid and forget the issue he has raised. Irrespective of whether the politicians do anything socially useful, those who have money and power, all the way from Mukesh Ambani to Amar Singh, need to give a thought to how they can make the society better and happier. Many do something or the other — help the village next to their factory, plant trees in the hills nearby, or send a contribution to a charity. But this is action on the level of individuals or businesses. It has not led to any noticeable improvement in the state of the nation in 60 years; it is ineffectual action. Business needs to think of collective, coordinated, meaningful action.

It has thought of that too. Business associations, whether national or local, have organised charitable activities for a long time. But they have not been any more effective. The associations need to ask why, and how they can be more effective. They must apply to charity the same managerial practices that their members apply to their businesses. They must make a plan and define what they want to achieve, and at each stage they should measure their achievement and compare it to what they had aimed at. And as they do so, they must aim higher and achieve more — they must make sure that they make a decisive difference.