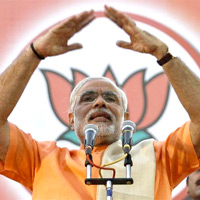 08 November, 2014
Print this article Font size -16+
Attacking Congress over the appointment of a Commission of Inquiry to probe the 'snoopgate' issue allegedly involving Narendra Modi, the BJP on Saturday (3 My) said the next government will review all the committees appointed post announcement of the Lok Sabha elections.
"All committees appointed after the announcement of elections will be reviewed and the government of the day coming into office will have every right to review the decisions," senior BJP leader Venkaiah Naidu told reporters in Hyderabad.
Home Minister Sushilkumar Shinde had said on 2 May that a judge will be appointed to conduct probe into Gujarat 'snoopgate' before counting of votes in Lok Sabha election.
"I want to assure the people..these steps of the Congress party will boomerang," the Rajya Sabha member and former BJP national president said.
Asked if such committees will be wound up, he said "..if necessary, yes. Those with ulterior motives will have to go."
"They (Congress) are shameless?They are unable to resolve the problems faced by the country and suddenly now at the last moment they have got frustrated and disappointed and are setting up commissions only with a view to defame (BJP)?but it will heavily cost the Congress and it will boomerang on them."
"Once our (NDA) government will come into power whatever decisions were taken post announcement of the elections will be reviewed," Naidu added.
The UPA government had declared that a judicial commission to probe 'snoopgate' allegedly involving BJP's Prime Ministerial nominee will be in place before the Lok Sabha poll process comes to an end on May 16.
Reacting on the violence in Assam, he demanded explanation from Prime Minister Manmohan Singh and Congress President Sonia Gandhi on the matter. "Why the PM is silent when the situation is violent?"
In the wake of a massive controversy over Narendra Modi's interview to Doordarshan, Naidu alleged, "DD has been misused.
Prasar Bharati has become the Prachar Bharati of Congress.
There has been black-out of Narendra Modi and projection of Congress."
"Prasar Bharati CEO Jawhar Sircar has written to the Board saying Prasar Bharati should be given more autonomy. We have information that clear cut political instructions were given to Prasar Bharati that Narendra Modi should be blocked and all focus should be on Rahul and Sonia Gandhi," Naidu claimed.
He further demanded the government if it was sincere then it should alongwith DD publish the details of the time allotted to each political party and leaders (coverage on DD) and bring out a white paper on the same.
Reacting to another query on Congress leader Digvijay Singh's relationship with a woman journalist, Naidu said, "He is busy with something else and I wish him best of luck."